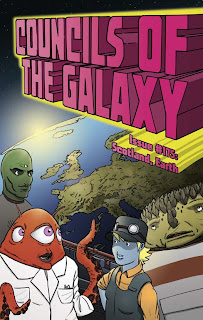 After last year's comic adaptation of The First Men On Mercury, created by Metaphrog for the Association for Scottish Literary Studies, was given away free on National Poetry Day to Strathclyde's school children, this year the charity Children in Scotland have gone one better.

This month they have been sending out 25,000 copies of a free comic to all Scottish schools, both primary and secondary, to encourage the pupils to take part in their school councils. The comic, entitled Councils Of The Galaxy, was illustrated and co-written by Edinburgh based artist Tobias Cook.

In Councils Of The Galaxy, Captain Captigan heads the alien crew of the star cruiser Anastas who are intrigued by the idea of Earth schoolchildren being able to contribute their views via their school councils since they come from a planet where head teachers spit acid and pupils don't have any say in the running of their schools.

Children In Scotland, in partnership with the University of Edinburgh, conducted a comprehensive study of school pupil councils throughout Scotland between 2007 and 2009 and as well as making their results, entitled Having A Say At School, public through the normal channels of reports and the internet, they chose to present their findings to the school children themselves in the form of a full colour comic. Their director of research, Jonathan Sher, said, "Too often, the results of research done about students is not shared with them. And when it is, it tends to be boring and therefore ignored. We created this comic book because we are keen for students to enjoy the experience of learning the lessons from HASAS."

There are more details of the report on the Having A Say At School website.

There are more details and sample pages of the comic on Tobias Cook's website.
Posted by Jeremy Briggs at 7:00 am

Email ThisBlogThis!Share to TwitterShare to FacebookShare to Pinterest
Labels: Scotland, Tobias Cook Councils Of The Galaxy