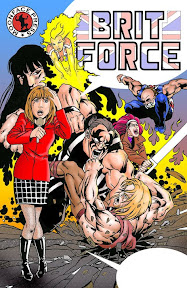 (Corrected credits, 27/5/10): Britannia! Bulldog! Lionheart! Stonehenge! Moonwitch! Helspawn! In the 1990s they were BritForce - the UK’s very own team of super-powered heroes. But driven appart by catastrophe, BritForce disbanded and haven’t seen each other in over a decade... until now.

Waiting in the wings is a threat so huge it might just be enough to throw the team back together. The Grail and his army of meta-human zealots have attacked Downing street and are intent on making Britain the power base for their brutal religious crusade

Will BritForce reunite to combat the threat? Or does Britain face a future crushed beneath the heel of religious oppression, presided over by a man convinced he’s the ressurection of the Messiah himself?

Published by Moonface Press after some distribution delays, featuring a cover by Glenn Fabry and art and story by Andy Radbourne, BritForce is on sale now in all good comic shops, with BritForce Issue 2 on sale soon.

Now a 64 page black and white title, the book was originally released back in 1993 by CM Comics, an attempt to launch a UK based superhero group on the comic buying world. 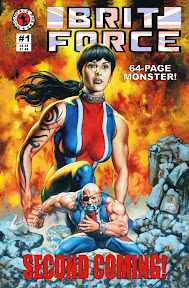 It actually had a degree of success anecdotally outselling Judge Dredd Magazine before it met an untimely demise," says Moonface publisher Andy Radbourne.

"I decided to relaunch it as I saw the potential of the series having worked on it as well as another couple of titles for CM Comics. It was launched at Bristol in 2009 but only achieved a comic shop release in March/April this year due to unfortunate distributer delays.

• BritForce on Facebook
Posted by John Freeman at 4:57 pm