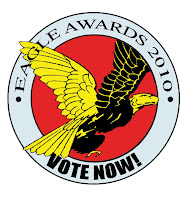 The Eagle Awards committee is to offer untried talent a chance to demonstrate their abilities before a global audience which has already garnered some prestigious support from the likes of Chris Claremont, Dave Gibbons and Mark Waid.

The project, which launches in July, will include a print anthology, to be published globally.

Unveiled at last weekend's Bristol International Comics and Small Press Expo, the Eagle Awards Initiative hopes to provide a unique platform from which the next generation of writers and artists can promote their storytelling ability in an increasingly competitive market.

Established as an annual event and with the emphasis very much on storytelling, the inaugural competition aspect gets underway on 1st July 2010, when the Initiative will open for submissions.

"I've always thought the Eagles could take a far more progressive and proactive role in the comics industry, especially within the UK which has such an untapped and unsupported pool of talent," explains Initiative director Barry Renshaw, who has been an active creator in the UK independent comics industry for over a decade. "When I was asked to rebrand the Eagle Awards themselves last year, I pitched the idea of the Initiative to the committee and it soon snowballed into something far more expansive."

"When Barry came to me with the idea I thought it was the best way to expand and relaunch the Eagles brand," says Eagle Awards chair Cassandra Conroy. "Considering the Eagles recieve global recognition I believed this would help the industry discover new talent not just from here and the USA, but from places we wouldn't perhaps expect."

In what is an unprecedented global talent search, entrants will be asked to submit an original self-contained illustrated story. The thousands of projected entries will be assessed by a hand-picked jury of comics readers, which will present a final dozen to the panel of judges comprising many of the comics industry's top talents.

The judges will select a top three from the final 12 with the winner be awarded a £1,000 cash prize. The runner up will win £500 with the third place submission being given £250. All three stories are to be included in the Initiative Anthology, which will be released as a print publication and in multiple languages across the digital media.

Barry Renshaw is himself a publisher of his own Engine Comics imprint, the award winning Redeye Magazine, and the popular How to Self Publish - A Rough Guide. He was asked to join the Eagle Awards committee in 2009 to help reinvent the brand, and saw an opportunity for the Awards to play a more progressive and proactive role in the comics industry. The Initiative is the first part of that expanded role. He's also as run or appeared at various workshops, seminars and panels on comics publishing over the years.

"The Initiative is the first stage in a several year plan to reform the Eagles into a tool for developing new talent, for educating young people about the potential in the medium, and to help connect the many disparate elements of the comics industry together," Barry explains. "As an example, we have creators, editors, publishers, journalists, festival organisers, distributors and academics from across the world among our judges."

Announcing his support for the Eagle Awards Initiative, BOOM! Studios editor-in-chief Mark Waid said, "This medium is nothing without new talent, young blood, and fresh perspectives.

"It's our responsibility to nurture the next generation of creators and share what we've learned ? and, in return, learn from and be energised by them. I can't wait to roll up my sleeves and get into this," added Waid whose numerous writing credits include Kingdom Come, The Flash, Impulse and Captain America.

Introduced in 1976, the Eagles are the comics industry's longest established awards. Unique in that they reflect the people's choice, they are awarded by fans who vote for their favourite in each category of the awards. They are named after the fondly remembered 1950's British comic anthology Eagle, and were originated by two British fans, Mike Conroy and Richard Burton. The awards proved to be successful, with American publishers such as Marvel Comics announcing their victories with pride. They have relaunched in 2010 with a new look, a new mandate and a new vision for the future.

• For further details on the Initiative, a full list of judges and complete submission guidelines, go to www.eaglesinitiative.com.