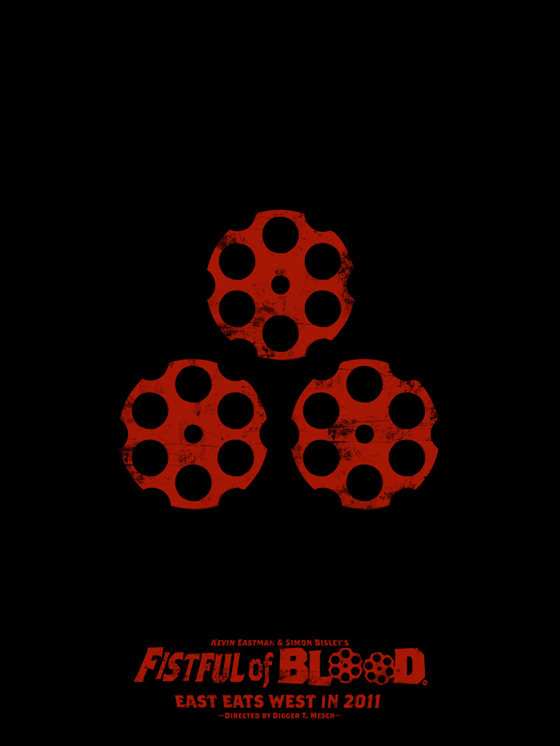 • Hearty congratulations to Gears of War and MamTor publisher Liam Sharp, who has landed himself the job of a lifetime. "I'm art directing a movie, and not just any movie," he reveals. "It's Fistful of Blood, the movie based on the cult graphic (and I mean graphic) novel by Kevin Eastman and Simon Bisley, great friends both."

The film is being directed by Digger T. Mesch, who created Art Asylum, with a cast that includes Peter (Chewbacca) Mayhew. It's being designed by Tom Muller, who talks about his initial work here, and who has set up a Flickr set which will include more design work as it becomes available. Right now, that's mainly the promtional work, including the poster, above.

"I'm only just taking it in," says Liam on his deviantart journal. "For the last few years this is the job I've dreamt of doing - production design/art directing. But in an extremely aggressive marketplace that seemed highly unlikely. And yet - here I am."

I've known Liam for many years, right back to Marvel UK when he was drawing Death's Head II, and I can't think of a more deserving case for someone whose hard work and dedication to his craft has finally paid off in a way he always wanted. Great news.
Posted by John Freeman at 9:19 am