A massive gathering of British comic publishers and creators will be showing the public what the indigenous industry has to offer at the Think Tank in Birmingham next weekend for the British International Comics Show.

As well as well known overseas guests like Howard Chaykin and Pasqual Ferry, visitors to the show will be able to meet some of the top British creators working in comics today. 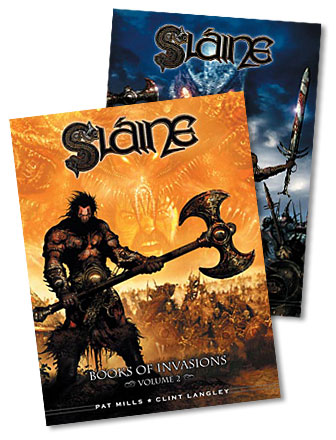 New additions to the guest list for the event, which has funding from the National Lottery via the Arts Council of England, include 2000AD superstar artist Clint Langley, who will be signing copies of his acclaimed graphic novels Volgan War and Slaine: Book Of Invasion at the 2000AD booth.

Titan Magazines will also be appearing at the show to find new talent, and Editors will be conducting portfolio reviews on the Saturday, joining DC Comics editor Michael Wright as they give up and coming artists the chance to receive feedback on the work and possibly a chance to land their first professional assignment in the industry.

"Many people out there think that British Comics are a thing of the past, but at BICS readers will discover, that it is anything but the truth, with publishers like Com.X, Markosia and Insomnia innovating with fresh talent and ground breaking stories, expanding the medium in new directions and taking risks creatively,” said show co-organiser Shane Chebsey.

• To find out more about BICS visit: www.thecomicsshow.co.uk