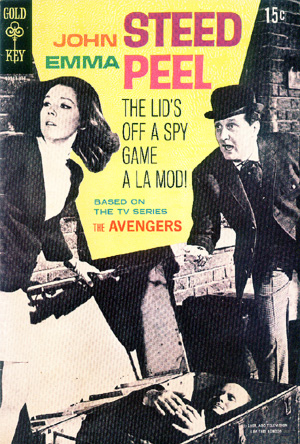 A lot of people know that there was a US comic featuring TV's The Avengers, which to avoid confusion with a similarly-named title and, probably, litigation from Marvel, was actually named the John Steed Emma Peel comic.

Published by Gold Key, a few people may also know that this featured colourised reprints from Polystyle's TV Comic, a weekly title which ran from 1951 to 1984 that mixed licensed strips such as Doctor Who, Fireball XL5, the Pink Panther and Tom and Jerry with original strips such as the long-running Mighty Moth.

The other British anthologies which featured Avengers-based strips were 'girls' comics, Diana and June.

The Gold Key comic reprinted two complete Steed and Mrs Peel strips from TV Comic, which ran from issues 756 to 766, published in 1966.

Although untitled in TV Comic, Gold Key named them The Roman Invasion and The Mirage Maker, with the first issue published in November 1968.

Although uncredited in TV Comic, Gold Key also identified the artist for their Issue 2 as as Pat Williams, who also drew the Doctor Who Sky Ray cards and album, and a couple of TV Comic Annual/Special strips. He also produced 46 pages of colour internal artwork as well as the wraparound cover for the annual sized hardback release of the second Biggles novel, The Cruise Of The Condor (More information on this on Bear Alley).

The reprint was, it turns out, actually highly modified. To illustrate the changes, we've published sample pages from TV Comic 756 (click the images above for larger examples): and the resulting Gold Key versions.

In an age where reprint across continents is big business, it's interesting to see just how much the US version of the Avengers strips were changed: while non-English speaking countries also carried out extensive 'surgery' to fit comics into their chosen format, I hadn't seen this level of reformatting in an English language reprint before, which included re-lettering and removal of some panels.


(Article complied with thanks to Ian Phillips and Jeremy Briggs, for the Bear Alley link)
Posted by John Freeman at 12:42 pm

Thanks for the link to Winged Avenger - it's (over) due an extensive overhaul. You nearly had me going, btw, as your piece seems to imply there was a second Gold Key Avengers comic with your use of the word 'issue' rather than 'story' when explaining where the Pat Williams credit came from. Good stuff.