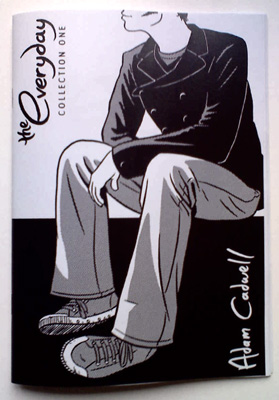 • Forbidden Planet International's Richard Bruton has been heaping praise on the work of Manchester-based Adam Cadwell, whose EveryDay webcomic . "Cadwell’s work is much more slice of life, observational style than others," says Richard. "This means that the majority of strips tend to be stand-alone things, relying on an interesting idea, event or gag than any narrative, concentrating on the immediacy of the moment being conveyed in 3 or 4 panels of the strip... But where some autobiography that concentrates only on the minutiae of everyday life does come unstuck with the repetition, Cadwell’s work is fresh and interesting to read." Three collections of Adam's Everyday strip are now available from his web site. Read Richard's full review here

• Dan Abnett has just published the dates for his "Bloody Pact Tour" of the North, which starts at the Games Workshop Metro in Gateshead on 16th October.

• Good news for British fans of the Muppets and ace cartoonist Roger Langridge. .The first Muppet Show Comic Book collection, Meet the Muppets, is out this week and the good news for readers in the UK is that although the original comics weren't officially available in the UK, the collection is and is available from Amazon UK here

. "So now British readers can stop wondering what I've been up to for the last year or so," says Roger. As an added incentive, the ten-page story he did for Disney Adventures a couple of years ago, which has never before been published in its entirety, will finally see the light of day in the collection. (There's a hardcover edition

• Martin Eden, creator of the critically acclaimed indie O-Men superhero comic, is putting the finishing touches to the first issue of his new project, Spandex. "The art is done, and now I just need to wait and see if I'm going to get lottery funding to print it up," he reveals on his blog.

• Bleeding Cool reports comics writer Mark Millar will be speaking at Charlotte Square Gardens as part of the Edinburgh Festival tomorrow night at 8pm, about comics, graphic novels and movies. However, as Jeremy Briggs reported here weeks ago the event is sold out: you'll need to see if there are returns on the door if you want to see him.

• Sky Box Office in the UK is to screen Watchmen from Monday 14th September.

• • Bleeding Cool also reports the hype for the Batman: Arkham Asylum game has given sales of Grant Morrison and Dave McKean's graphic novel that inspired it a huge boost.

• Broadcast reports Michael Chaplin, creator of the BBC drama Monarch Of The Glen, is adapting Goodnight Mister Tom author Michelle Magorian's new young adult novel Just Henry as a family drama special, potentially for ITV. While the project has not yet been given the go-ahead, it is in development at ITV Studios. Published by Egmont UK, Just Henry is a post WWII thriller that follows Henry, a film-loving and judgmental teen who lost his father in the war, as he reluctantly becomes friends with two classmates when they are put together to work on a school project. When Henry is given a camera to help with the project he takes a photo that turns everything upside down and in the process he teaches him about friendship and not to be so judgmental.

• And finally... they aren't actually new if you subscribed to much-missed subscription weekly The DFC, but if you missed the run of ace fantasy strip Mirabilis there you can now read the first 25 pages (ie the first chapter of the Winter book) over on the Mirabilis website. Highly recommended!
Posted by John Freeman at 3:52 pm