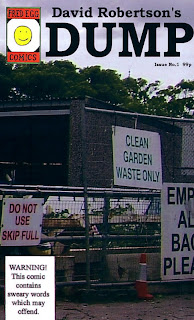 David Robertson has sent us details of his new small press title Dump which follows on from the two issues of Berserkotron, his previous title. Dump is a 24 page US size anthology with colour covers and black & white interiors all written and illustrated by David. It covers topics as diverse as Delhi belly, suicide, extinction, what life models think about and just why the long lived members of the Jedi order would allow humans to join when they only live for such a short time. Dump issue one is available direct from David for the remarkable price of 99p including UK postage.

David's comics work has appeared in such small press titles as Belt Sander, Crap Your Pants, Eric, Shiot Crock and Small Pets as well as The UK Web and Mini Comix Anthology and the Europeans cartoonists’ website 40075km. He has written comics related articles and reviews for The Comics Journal, The International Journal of Comic Art, news.comm, Nude, Starscape and Spaceship Away!

• Orders from the rest of the world should contact David via d1robertsonAThotmail.com

• For more details and reviews of Dump visit the Fred Egg Comics blog.
Posted by Jeremy Briggs at 10:02 am