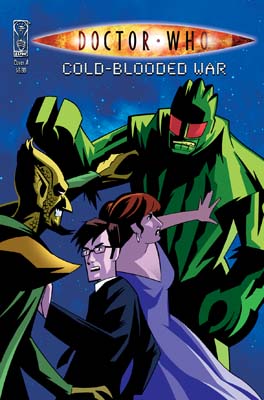 Drawn by Adrian Salmon, the story is set in the 26th Century first visited by the Third Doctor. The Tenth Doctor and Donna attempt to broker a peace plan between two very hierarchical and pompous alien races, the Draconians and Ice Warriors, but their best efforts are derailed by someone who stands to gain from the continued conflict.

Although Richard's lettering company, Comicraft, has been busy behind the scenes working on IDW's Doctor Who range, this is his first foray back into writing Doctor Who comic strip for some years, while Gary Russell's well known love of the Ice Warriors - they featured heavily in his Radio Times Doctor Who comic - is given fine treatment by Adrian.

• You can view a preview of the new comic, which is only licensed for sale in North America but still makes it to the UK as a 'grey' import, here.

• For more official information and to buy the comic in North America visit the Cold Blooded War page on the IDW web site
Posted by John Freeman at 11:49 am