Time Capsule: The Origin of "Miracleman" 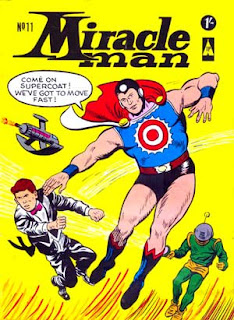 When Alan Moore and Garry Leach revived Mick Anglo's Marvelman for Warrior back in the 1980s, the treatment proved a spectacular success. But when Eclipse Comics secured the rights to publishing Marvelman in the US, the name of the character ran afoul of litigation from US publisher Marvel Comics, who demanded it be changed.

(This unpleasant incident, as you can imagine, caused much acrimony between all parties and led to Alan Moore refusing to ever countenance working for Marvel. For more information on the entire history of Marvelman, visit this page on the World's Greatest Critic site).

While the whole matter did nothing to improve US-Anglo comic relations but Eclipse still had to come up with a new name for the character if they wanted to publish the comics in the UK. As J.C. Maçek III notes on his Marvelman page, they decided on "Miracleman" to satisfy Marvel Comics (but still ensure that the "MM" logo didn't have to be changed).

Here at downthetubes though, we wonder whether if Eclipse or those advising them knew whether Mick Anglo also created a super-powered character called Miracleman? 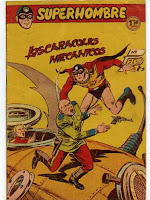 In addition to his work on titles such as Marvelman in the 1950s for Len Miller and Sons, Mick was asked to create a superhero comic for the Spanish market. What he did was to use a similar method he had used when Miller lost the rights to publish DC Comics Captain Marvel in the UK, and adapted (and redrew) some of his Marvelman stories under the name Super Hombre. The character appeared in Editorial Ferma, which ran for 68 issues from 1958.

Mick then resold these strips back to the UK, using the name Miracleman. The character was sold through Top Sellers comics and ran for 13 issues beginning in 1965.

Top Sellers titles were black and white American comics, running for 60 odd pages and in addition to the Miracleman stories featured reprints of DC Comics Blackhawk.

Miracleman was also sold in Germany (see info here) and Holland (where he was known as "Mirakel Man"). 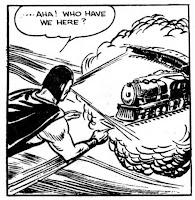 Like Marvelman, Miracleman's alter ego, cub reporter John Chapman, became super powered by uttering a special phrase: "Sun Disc", rather than "Kimota". His powers seem more akin to DC Comics Superman than Marvelman however, and also dependent on him actually holding the ancient "sun disc". In one of the issues we've come across -- Miracleman #11 - it seems anyone can become a "Miracleman" by holding the artefact... including villains!

Miracleman was also aided in his battles against evil by Supercoat - yes, powers borne of putting on a special coat. Surely one of the oddest superhero names ever?

An entertaining gem of British comics history, nonetheless, and one we thought you'd enjoy.

• As we reported last month, TwoMorrows Publishing is to publish an issue of Alter Ego magazine dedicated to Marvelman soon. Wrapped in a cover by Rick Veitch, #87 of the magazine, edited by Roy Thomas, presents an overview of the original 1954-1963 saga of Marvelman, Marvelman Jr. and Kid Marvelman and will include an interview with writer/artist/co-creator Mick Anglo. The issue, due for publication in July, will also feature rare Marvelman/Miracleman work by Alan Davis, Alan Moore and others. More info here on the TwoMorrow web site

• Special thanks to Alan Wright for imagery used in this item. For more information about Marvelman, check out the International Hero web site, or track down a copy of Dennis Gifford's Complete Catalogue of British Comics.
Posted by John Freeman at 10:31 am