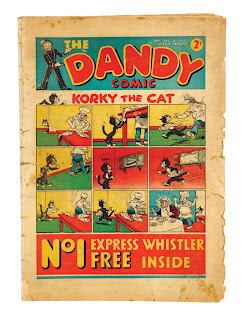 There's still time to bid on items - including a rare copy of the first ever Dandy - from British online auction site Comic Book Auction's Summer Catalogue.

Included in the British section of the catalogue is an extremely rare first issue of DC Thomson's humour title, Dandy. Published in 1937, this first edition introduced Korky the Cat, Desperate Dan, Keyhole Kate and their chums and is described as "a well worn copy with 3 inch spine tear and multiple edge tears although only minor loss." Only 20 copies of this first issue are known to exist, so expect some high bids, well above the £500-£600 reserve.

Also included this time are some also rare wartime Beanos, all with bright fresh covers and white/off white pages. Since a lot of paper was recycled for the war effort, copies of these issues are probably even rarer than some of the pre-war titles such as Champion, Butterfly, Hotspur and Schoolgirls' Own, which are also being offered.

Original Desperate Dan art by Dudley Watkins - a staple of most these regular auctions - is also offered, including work published in a 1942 issue of the Dandy. (Artist Dan paints the town with bristles from his beard. The pictures are so realistic the mayor gets Dan to camouflage all the tanks and planes for battle!). 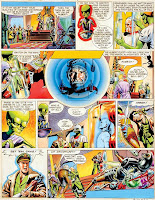 Of interest to many downthetubes readers though will be a page of Ron Embleton art featuring Wulf the Briton from Express Weekly 155 (published in 1957), in which Viking Wulf proves himself to the warrior tribesmen in his quest to solve the riddle of the Sphinx. Also beng offered is original Dan Dare art from the Eagle by Desmond Walduck (featuring both Dan and the Mekon), Supercar and Joe 90 art, a Dan Dare space gun, bound copies of Eagle and Lion, issues of TV Century 21 - including several rare and much sought after Specials - Valiant, Tiger and more.

For US comics fans, the chance to own the first appearance of Spider-Man in Amazing Fantasy #15 is sure to stir plenty of interest, even if the issue comes stickered with a British 9d tag. A first issue of Amazing Spider-Man is also in the auction, along with plenty of ther goodies including Fantastic Four #1, X-Men #1, Millie the Model, Batman #20 from 1944 - the first Batmobile cover - and lots of other goodies.

• Bids on items, which include comics and original art, will be accepted until Tuesday 9 June at 8 PM UK time (GMT).