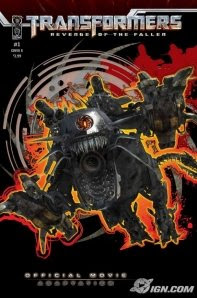 There's still a month to go in the UK before Transformers: Revenge of the Fallen opens in cinemas here (19th June), but the first part of US publisher IDW's comic adaptation, written by Transformers supremo Simon Furman, is on sale now in all good comic shops.

"This was my first stab at turning a movie script into a comic book, so I’m eager to hear what people think," Simon notes on his official blog. "It was actually more of a challenge than I thought it would be, as so much has to be condensed, refined, shuffled or realigned to make it work as a cohesive, coherent panel-to-panel comic book.

"All the key plot points need to be front and centre and some stuff, inevitably, has to be almost sidelined or skipped over...But it was fun too. And I was pleased with the end product, especially as artist Jon Davis-Hunt made it all look so damn good!"

• Revenge of the Fallen: The Official Movie Adaptation #1 is on sale now, with #2-4 following in quick succession thereafter. For more details of all IDW Transformers releases, check out their website here.
Posted by John Freeman at 12:51 am