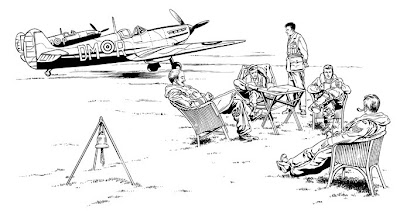 When it was published in June 2006, Con Iggulden's The Dangerous Book for Boys

was a surprise hit. Mixing factual historical stories with information on places, things and "how to" articles, the book appealed to young and old alike. From how to skim stones or play conkers, to details of patron saints and royalty, via fishing, dinosaurs, spies and the planets, the range of subjects was enormous and other publishers soon jumped on the bandwagon while Iggulden and his publisher, HarperCollins, stayed one step ahead of the competition with Dangerous pocketbooks and yearbooks. The latest title in this line is The Dangerous Book of Heroes

In this Dangerous Book author Con Iggulden, with his brother David, tell the inspirational stories of British heroes and heroines, from the familiar names of RAF pilot Douglas Bader and nurse Florence Nightingale to the less well known such as archaeologist Gertrude Bell and buccaneer Henry Morgan.

The entire book is illustrated using black and white illustrations by artist Graeme Neil Reid, who has previously worked on such diverse titles as Desperado's Negative Burn anthology comic and the BBC's Radio Times listings magazine. Graeme took the time to talk to Jeremy Briggs about his work on the new book...

downthetubes: How did you come to be involved in the Dangerous Book of Heroes project?

Graeme Neil Reid: I was asked along with two other artists to 'try out' for the book. We were given two sample chapters to look at and asked to produce what we thought would be best. They really left it quite open as to what we could do with the layout and design of the pages and what to choose to illustrate. I submitted my samples and about three weeks later was asked if I wanted the job.

downthetubes: With such a wide variety of subjects in the book, how were the illustrations chosen?

GNR: A lot was left to my discretion but we also had a tone meeting and a few basic guidelines where set about what I could and couldn't show. We had all agreed that even though many of the subjects in the book are about war that we wouldn't show any gratuitous violence in the book. We also worked out a basic plan of what we'd like to see illustrated in the book.

downthetubes: The layout of the book sometimes has the illustrations wrapping around the text as well as others covering two pages. Did you decide on layouts or was this set by the book's designer? 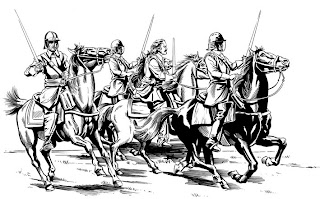 GNR: Part of the open brief was to 'do what we wanted' so that for me included how the illustrations would appear on the page. The interior of the book was 'set' or laid out by myself so I had control over how I could use the images, say as a stand alone image or linked images spread over the pages.

downthetubes: How much input did you have from the authors?

GNR: Once I had produced a pencil version of each chapter it would be submitted to the editor and if approved it would be passed on to the authors for approval. In many respects I was lucky that they liked a lot of the work I produced and most illustrations where either approved to be finished or had minor tweaks. Other than that I didn't have any involvement with the authors, it's very much their book and I was lucky enough to get to be involved.

downthetubes: With some subjects being from the recent past and others centuries old, how did you manage to get enough reference material?

GNR: With a lot of hard work to be honest! There are 43 chapters in the book, so it's very much like trying to illustrate 43 books, as the subjects all required their own referencing.

I'm very interested in history myself so I found that for maybe a quarter of the book. I had already a basic knowledge in the subject and could confidently make a start on. On some chapters, I was assisted by friends who I knew had a good understanding of the subject and they lent me books and answered my questions patiently. I was also given the assistance of an image researcher by the publishers and she trailed through the internet and libraries searching for images.

We tried our best with each chapter to get things technically right and I hope that shows in the book. However, the schedule we had to stick to meant that quite often I would have around a day to two days to do the reference hunting I needed and sort it into an order I could use before I had to start working. That might sound a lot of time but in the cases where you where approaching the subject with no knowledge yourself and then had to figure out uniforms, weaponry, ships, buildings and many other things and make sure that it was accurate, then it really was hard going. 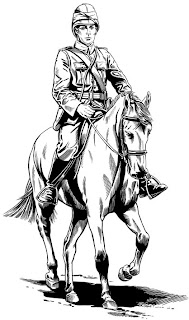 downthetubes: Finally, with such a wide range of subjects to cover did you have a favourite to illustrate?

GNR: I'm very much a child who was brought up on war comics and so I instantly lent towards the chapters that involved those subjects. But as I said, I have a liking for history anyway so much of the book was of interest. I got to draw a lot of planes which I enjoyed but sadly only one tank, which is my favourite piece of military hardware!

I've also become pretty proficient at drawing horses and quite a few naval ships. Overall, it was an enjoyable project and I hope people pick it up and give it a go.

All illustrations courtesy of Harper Collins, with thanks to Graeme Neil Reid

• Buy The Dangerous Book of Heroes from amazon.co.uk

• Buy The Dangerous Book for Boys from amazon.co.uk