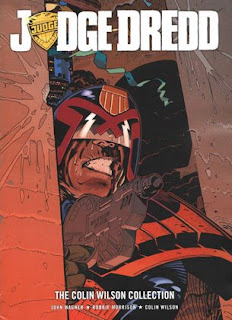 Artist Colin Wilson looks set for a busy year, with a new, still secret, Star Wars project in the works, along with his new Judge Dredd strip, his first Dredd work for nearly ten years.

We previously reported on writer Al Ewing's enthusiasm at writing Magic Bullets for the new Judge Dredd Magazine, on sale now in all good newsagents. "I must say I've had a ball drawing Old Stoney Face after all this time," Colin Wilson says of the 20-page story (a further 30-page story will follow later in the year).

Colin's also pleased by Rebellion's release of Judge Dredd: The Colin Wilson Collection which features 50 plus pages of Dredd stories he drew for both 2000AD and The Megazine in the late 1990's.

"A funny though just occurred to me..," the New Zealand-born artist, whose credits also include Lt. Blueberry, Thunderhawk and Battler Britton (see dtb interview), muses on his blog. "if I get the chance to draw something for 2000AD next year, I will have had work published there for each of the last four decades. Scary..."
Posted by John Freeman at 12:14 pm