In Review: Thomas Wogan is Dead 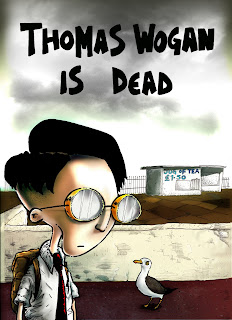 Back in 2004 British indie creator Dave Hughes, who hails from Barrow but in now based in Lancaster, self-published his first comic story, The Immeasurable Adventures of Gorky Park (see news story). Reaction was positive but sales were not what Dave expected, despite throwing himself full tilt into promoting the book, sending out more than 30 copies to various British comic shops (few of which even acknowledged receipt) and a distinct lack of response to an ad in Comics International.

Disappointed perhaps at not setting the small press world afire with his work -- which I described then as "akin to Rugrats on acid" -- it's perhaps no surprise that there's been such a huge gap between his first story and his new one, Thomas Wogan is Dead.

Despite the wait, it's good to see Dave back in the saddle, delivering the quirky but thought-provoking tale of Thomas Wogan, who finds himself in a strange waiting room with nothing but a ticket and his spectacles to protect his modesty. It’s not clear what’s happened, but perhaps the other characters in the waiting room -- a cuckoo, a sea urchin, a natterjack toad, a bat, a fish and an egg -- can shed some light on the matter…

Thomas Wogan is not really the sort of character you'd expect anything odd to happen to, but this strange waiting room proves to be like something out of The Twilight Zone, with the various talking creatures revealing their life stories before demanding to know Wogan's, which isn't exactly anything that exciting, even when he describes the best day of his life, when he skived off work and went to Morecambe. Wogan's humdrum existence working at Perriman Plastics, cooking processed snacks, television and admiring Delia Smith with a near pathological, e-stalker intensity (he spends some of his spare time 'updating' her Wikipedia with all manner of strange additions, for example) hardly seems to be the stuff of legend.

And yet, when Wogan finds himself naked in a strange waiting room with a group of different species, all of them with numbered tickets, who try and piece together between them exactly what’s happened to them, it's clear something extraordinary has happened to them... but what? What's the signficance of the LCD counter on the wall? As the creatures tell their tales, they soon realize they have one thing in common; they all end in death.

Running to some 72 pages this is a fun piece of work, with all the styling and quirky weirdness of Gorky Park, with some well realized sequences, particularly the Tale of the Cuckoo and Wogan's own story. His human characters are indescribably grotesque yet appealing, from Wogan himself to the overweight, make-up-laden pool player Sharon, who he meets in Morecambe. The story itself is also genuinely thought-provoking and well-told, although I would say Dave would do well to look to improving his lettering for any further work, perhaps even considering an e-font next time (the text is clear and better presented than some professionally published works I've read recently from some of Britain's book publishers pushing their graphic novels, but still needs work).

Wrapped in a cover with colours by Ant Mercer, the background an image of Morecambe only this week gone forever, bulldozed out of existence, Thomas Wogan is Dead is an unusual but enjoyable work now available from Smallzone, direct from Dave himself (priced £2.50 -- email stonechatproductionsATyahoo.co.uk for how to order) and, soon hopefully, the Travelling Man comic shops, as well as via First Age, Lancaster.

"I got the idea for this about four years ago and have been working on it on and off ever since," Dave told us. "My main hope is that the book’s mostly funny but also that I’ve managed to pull off the odd, dare I say it, poignant scene.

"I’m a bit of a bird and general nature nerd, so a lot of those things inspired me. I’ve put a fair bit of myself into the book but would like to say I’m not in love with Delia Smith! 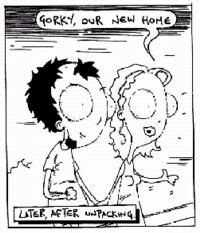 "The Immeasurable Adventures of Gorky Park had a great, if localised reaction," he continues. "Some people seemed to love it to bits and wanted a sequel, which I just didn’t have in me (maybe some time). On the sales front, it bombed, but I choose to see it as a successful artistic endeavour. Well, better to dwell on that than the £800 costs!"

What's next from Dave? Are we really going to have to wait another four years for his next story? It would be a darn shame.

"As usual, there are several very messy notebooks crammed with discarded ideas behind it," he reveals. "I only end up using about five per cent of the stuff I scribble down!

"It would be nice to get into the discipline of doing this kind of work more regularly."

Here's hoping. The counter is ticking...

• Read Rob Jackson's review of Thomas Wogan is Dead
Posted by John Freeman at 8:57 am