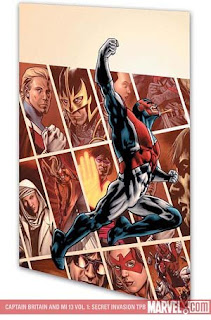 Captain Britain and Doctor Who writer Paul Cornell will be signing copies of the Captain Britain and MI13 - Secret Invasion graphic novel, the first collection of the Marvel Comics series, at Forbidden Planet later this week (Thursday 15th January).

In this collection, the Skrull Invasion of Secret Invasion isn't restricted to the US - when the Skrulls hit Blighty, only Captain Britain and MI:13 stand in their way!

With the fate of Britain hanging in the balance, can the heroes find out what the Skrulls are after before it's too late? Featuring Prime Minister Gordon Brown in action!

• By the way, in a weird twist on the world it seems Captain Britain, like President Obama and other major world figures, is now officially on Twitter, posting daily: twitter.com/Captain_Britain. If you've been holding out from being part of this social communication revolution, what better reason to leap aboard? (Hmm, nope, still not convinced...)