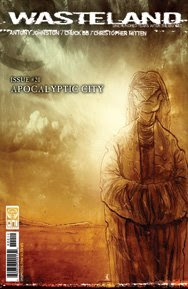 Wasteland #20, the latest issue of the monthly comic book series published by Oni Press is on sale this week, written by Antony Johnston and drawn by Christopher Mitten, with covers by Ben Templesmith.

Wasteland takes place one hundred years after the Big Wet, a disaster that destroyed most of the world as we know it. Half the world is now covered by poisonous, rising oceans. What dry land remains is a broken, infertile world of hard ground and harder living.

Over on his official web site Anthony ("Author, designer and all-round British person" whose credits include Dead Space and the Alex Rider graphic novels) describes the story, Apocalyptic City as "another of our 'interlude' one-off issues with a very special guest artist, Eisner award-winner Chuck BB of Black Metal fame."

"This issue is also a bit special because we've approached it differently," he adds. "For the first time in these interludes Christopher contributes some art too, and Chuck's art illuminates the actual fables and stories of how Newbegin was founded. It's something I've wanted to try for a while, so I hope you enjoy it."