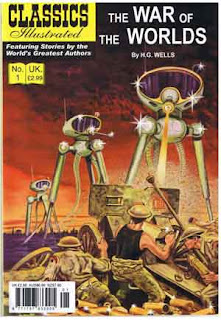 Not to be confused with British publisher Classcial Comics' full length graphic novels, these new Classic Comic editions feature re-coloured artwork with digitally enhanced covers and are available from newsagents such as WH Smiths, Borders and other leading retailers throughout the UK.

The comics will also be in stores in Australia, New Zealand, South Africa and the Republic of Ireland.

Published monthly, the first issue, released this week, are The War of the Worlds and Snow White, followed by Oliver Twist and The Ugly Duckling in October. The new issues, annual subscriptions and back issues are available from the Classic Comic website.

Classiccomicstore.com is a website and business dedicated to providing information and reference material about Classics Illustrated as well as supplying some of the loveliest comic books produced from the 1940s through to the late 1980s.

"I have been supplying vintage copies of this wonderful series since 2000 to hundreds of collectors across the world," says Jeff Brooks, Publisher and MD of Classic Comic Store, "and I'm sure that the time is right to re-introduce them to new generations of readers.

"The original artwork remains as the true benchmark by which the Graphic novel is measured and we are sure that this wonderful series will captivate people everywhere - whatever age."

Email ThisBlogThis!Share to TwitterShare to FacebookShare to Pinterest
Labels: Classics From The Comics, Educational Comics