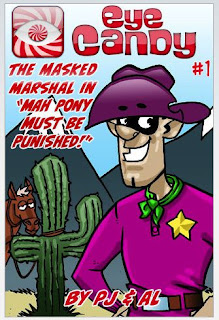 Paul Holden and Al Ewing's Eye Candy comic - the world's first comic for kids for the iphone (mentioned earlier this week) - is now on sale from the Apple Store.

The first issue of the digital comic features the Masked Marshal in "Mah Pony Must be Punished!", written by Al and drawn by Paul.

"This is the Masked Marshal's return to the comics field with a full seven more panels to play with than he had before," says Al. "I do miss the old hypercompressed days when we tried to fit an entire issue into one panel - top that, Grant Morrison! - but those good times had to end and I'm glad to see all those old characters getting a new lease of life instead of rotting away in Comics Limbo with poor Awkwardman, who can't even get a guest slot in an ultra-high profile 3D comic."

Go to the iTunes store now - if this link doesn't work, look under 'Books' and 'Blue Pilot Software' - and spend just fifty-nine pence (Yes, fifty-nine pence only!) on what Al says will "likely be the future of the kids-comics industry!"

And he argues, it's either this or Dandy Extreme...

• Buy Eye Candy #1 from the Apple Store
• Comics for more than just the iphone from ROK Comics (look, I work for them, okay? It's my day job. It pays for this site!)
Posted by John Freeman at 2:22 pm