In Review: Classics From The Comics 149 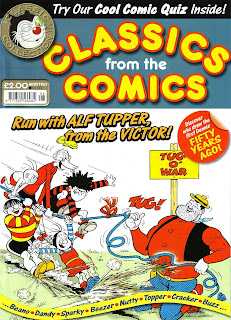 It has been out for a while but it is still worth giving the latest issue DC Thomson's monthly reprint magazine Classics From The Comics a hearty pat on the back. Issue 149 includes two sections that are new to the title.

As a black and white humour reprint magazine they normally cover the eight DCT humour titles - Dandy, Beano, Topper, Beezer, Sparky and the three less well remembered, Nutty, Cracker and Buzz. The title is 68 pages of reprints from these titles and have recently started putting the originating comic and year on each reprint. Eagle eyed readers with see the usual DCT publishing date on each page which means that, for instance, we now know that the reprint of Baby Crockett on page 22 of the current issue was originally printed in the issue of Beezer dated 24 April 1965.
Now while some of the old style humour titles also printed adventure strips aimed at a slightly younger audience than the adventure comics themselves, Classics has appeared to be wary of reprinting these. However this issue things have changed and, heralded by a page entitled Best For Boys where they mention adventure heroes such as the athlete Wilson, pilot Matt Braddock, amateur sportsman Bernard Briggs and DCT's Tarzan character Morgan The Mighty, the issue reprints the original three pages of The Tough Of The Track comic strip drawn by Pete Sutherland and published in the 30 June 1962 issue of The Victor. They also ask for suggestions as to who else should be featured. Let us hope that this will be popular enough to be continued as it is something of a stretch for a humour title.
Something that isn't so much of a stretch for the title is another new section entitled Classic Artist. This features Dennis The Menace's artist creator David Law with a one page biography and photograph plus five pages of art that are credited to him covering Dennis, Corporal Clott, Beryl The Peril and Cap'n Hand. While it would be good for Classics to credit all the artists for their work this is a good starting point.
From its Ken H Harrison tug of war cover featuring Desperate Dan vs various other characters to its (oddly) coloured Korky The Cat back cover, at only £2 Classics From The Comics is a title worth looking out for and certainly dipping into at least now and again.
Classics From the Comics is a 68 page A4 black and white magazine published monthly by DC Thomson and should be available in newsagents. It is also available on subscription directly from DC Thomson.
Posted by Jeremy Briggs at 10:40 am

Email ThisBlogThis!Share to TwitterShare to FacebookShare to Pinterest
Labels: Classics From The Comics, DC Thomson, Victor