Updated 24/9/08: Publishers Weekly reports that Virgin Comics, the two year-old joint venture between the Virgin Group and India's comic book publisher Gotham Entertainment and publishers of the recent Dan Dare mini series by Garth Ennis and Gary Erskine, has closed its US offices in New York.

Among the apparent casualties of the cancelled comic line are a second, already-scripted Dan Dare, Grant Morrison's MBX web animation and, according to comics journalist Rich Johnston, Terry Gilliam's Time Bandits II, who also reports their have been redundancies at the company's Indian offices.

Hollywood Reporter notes that the closure is due "the current macro-economic downturn" in its report and CEO Sharad Devarajan and president Suresh Seetharaman, says Virgin hopes to restructure the business and consolidate its operations at a Los Angeles base.

Eight people have been laid off from the company, founded in 2006 to create superhero and adventure print comics based on Indian mythology, which could also be licensed for film and merchandising and financed by Richard Branson's Virgin Group. Author/speaker Deepak Chopra is Chairman of the company and his son Gotham Chopra is CCO and Editor-in-Chief of Virgin Comics and Virgin Animation respectively.

It has published 18 trade paperback collections and three hardcover titles and produced more than a dozen different comics series, with contirbuitors including Guy Ritchie, John Woo, Nicolas Cage, Ed Burns and musician Dave Stewart. Ritchie's The Game Keeper found a home at Warner Bros. but the status of the film is unclear this time and at this stage, it is also unclear what will happen to the rights to these properties. 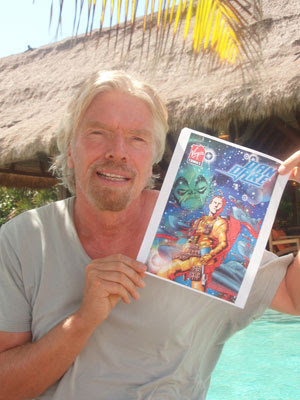 Variety reports on the low sales for many titles and opines that the publishing label ddi not succeed with comicbook readers, mainly because the company focused much of its efforts on books with stories involving Indian mythology.

Hollywood, though, has grown increasingly interested in Virgin Comics because of its deals with filmmakers and talent.

In a statement but the company said it would not remain idle.

"We remain excited about the business and partnerships we have built through Virgin Comics and are working towards a restructuring that properly takes the business forward," said Devarajan.

Dan Dare Gary Erskine told downthetubes he remains hopeful the second series featuring the character may yet appear. "There are still discussions going on between Virgin and Gotham," he said in a brief statement.

• Heidi MacDonald offers a thorough analysis of Virgin Comics demise on The Beat: Requiem for a Virgin... "... Starting a comic book company just to get movie options as a business plan... that does not work..."