200 science fiction fans of all ages enjoyed a "Brief Encounter" with Doctor Who star Colin Baker this weekend on Carnforth railway station, Lancashire.

When the event sold out - surprising even the organisers, Carnforth's new TARDIS Shop - Colin's question and answer session had to take place on the platform of the famous station itself, interrupted occasionally by passing trains packed with bemused passengers wondering what on earth was happening on the platform.

Carnforth station is of course famous for being the location for the filming of the 1940s romantic drama Brief Encounter, prompting the name of the event.

Responding to a huge range of questions from the audience the popular actor, who will soon be touring in Michael Frayn's Noises Off around the UK, regaled a crowd of all ages with both memories from his time on the show to his current work, which includes reprising his role as the Doctor for the Big Finish audio adventures, also broadcast on the BBC7 digital radio station.

Colin answered questions for an hour and a half, recalling a scary encounter with a Dalek on the studio floor of the BBC late at night ("It started to move, and for one moment I was really scared... one of the operators was inside fixing a squeaky joint!"), sharing filming memories and answering all manner of questions about his character. ("Did you ever meet K9?" asked one youngster. "No, not on the show, though we have shared a couple of drinks socially," Colin replied fondly). 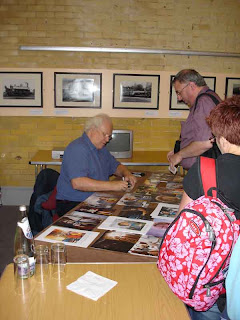 He spoke highly of the new show but felt it highly unlikely he would appear on it as the Doctor. He also suggested that there might come a time when the Time Lords would return, dismissing the ocassionally mentioned "time lock" blocking the Doctor from returning to the Time War. "If they decide to being the Time Lords back, they'll soon find a way around that!" he declared confidently.

Colin also told fans he would like to write more, still pleased by his 1980s comic strip for Doctor Who Magazine, a copy of which was offered as a raffle prize.

Colin's fascinating and humour-filled talk was followed by an autograph session and other events through the day.

The organisers were pleased by the turn out and Colin was delighted by so much enthusiasm for the original Doctor Who series.

More Doctor Who events are now at the planning stage.