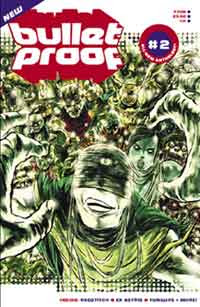 • Bulletproof Comics #2, an anthology title of top comics talent, is now at the printers and will be available soon from the Bulletproof web site (www.bulletproofcomics.co.uk). It’s another 80-page beast of an issue, but this time around the title has 33 pages of full colour! Here’s a breakdown of the stories and their respective creators:

• Over on Brendan McCarthy’s official fansite, The Strangeness of Brendan McCarthy, the top comic creator reports he has been commissioned by Marvel Comics to write and draw a new Dr Strange and Spider-Man three issue mini series.
"I’m just getting into it and I expect it to be finished early next year," he reveals. "It’s quite a thrill to finally get to draw the Doctor, my favourite Marvel character - and Spidey too."
Brendan McCarthy is one of Britain's most talented comic book creators and designers, whose unique and distictive style has influenced a generation of artists and writers. He has produced some classic UK graphic novels, written and designed some ground-breaking TV series and worked on many successful Hollywood movies.
"To harmonise myself with the sublime 'Ditko Dimension', I have been digitally remixing some of his original 60's pages," he says, "trying to get a feel for them from another 'fresh' visual angle... And in doing so, realizing just what a total genius he is."
Check out the site now, which includes some revamped Zyboria designs, with a digital 'wash 'n brush-up' by 2000AD's Boo Cook.

• Short Fuses, the Official Time Bomb Comics Blog for the Leicester-based indie, publishers of Ragamuffins and the upcoming The Sisterhood is now up and running, featuring news, views, profiles and all sorts of Time Bomb Comics related malarkey! It's updated by publisher Steve Tanner "whenever I have the time and the inclination", he tells us.

• Broken Voice Comics have announced that their longest-running omline strip, Shades, will return soon. The British indie is currently planning to launch Chapter 9 of Shades early in September or, if things go really smoothly, maybe even before the end of this August. To give you a taste of what's to come, we've a special treat over in the Previews and extras area at Broken Voice Comics, featuring a sample pic, taken from a page of inks by the new artist, E.C. Nickel.

• DC Thomson artist Keith Page reports that Some of his favourite Commando characters including the infamous "Ferret McGlone" are returning some time next year. Check out his blog for the latest news.

• Markosia has added a bunch of new books on wowio which can be viewed for free. Two new series have been posted, including the super-successful Breathe by John Sheridan and Kit Wallis, and the critically acclaimed Hope Falls by the famous Tony Lee and Dan Boultwood. To read the entire four-issue series of 'Breathe' Click Here

• A quick reminder that the Manchester Zine Fest takes place this coming Saturday (30 August), with stall, exhibitions and more devoted to local comics.

• ... and talking of events, British comics fans Fiona Jerome and Hass Yusuf are joining forces to bring you Comics Friends Reunited, hopefully the first of many annual events where old friends from the wonderful world of comics can meet up. Since the UK Comic Art Convention (UKCAC) ended ten years ago, there's been no regular outlet for creators or fans in London to meet up. (Think of it as UKCAC without the bother of going to events, where you can eat, drink and chat all day long!)
The first CFR event will take place on Saturday 11 October 2008 from noon til 11pm at The Phoenix Pub, 14 Palace Street, Victoria London SW1E 5JA. Food will be available all day. Full Menu from 12.00pm-4.00pm and 7.00pm-10.00pm, with a limited menu of bar snacks between 4.00pm-7.00pm. There are good veggie options and decent gastropub standards as well as tapas style bar snacks.
Don't be put off by reviews you read online, as the pub was recently completely revamped, and now has a decent range of beers and a good wine list as well as a bright and comfy interior!
Wonder if there will be origanised tours up to that temple of comicdom in the 1980s, the Westminster Hall?
Posted by John Freeman at 3:07 pm