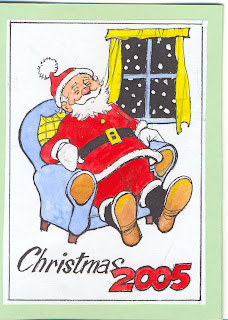 For a little over five years, John Freeman and I produced Eagle Flies Again, a fanzine dedicated to British boy’s comics with a bias towards 1980s Eagle and other comics of that era.
John and I were blessed to have support from many artists and writers from the great days of British comics. But there were perhaps two men who supported EFA more than anyone else - one was Barrie Tomlinson, the former Editor and Group Editor of New Eagle. The other was Mike Western.

If there was one word to describe Mike it would be 'gentleman'. The word is perhaps overused but Mike was one of the old school - politeness, kindness and generosity were the qualities I will remember him for. I never met him but during the time EFA was in production, we maintained regular contact by letter.

When I first contacted Mike, I was delighted to receive a letter back from him written in the sort of precise, immaculate handwriting that only an artist can produce. We interviewed Mike about his Battle work in issue 3 of EFA and when he saw the finished result he commented ‘It makes a splendid article.’

Mike followed up the Battle interview by writing an article on his work for New Eagle. When we reprinted the Battle and Eagle pieces in a compilation of EFA material, he wrote to me to say 'Many thanks for the Best of Eagle Flies Again compilation copies - I was delighted and my sons will appreciate getting to see the old man getting so many pages to himself!'

When artist Martin Baines lent me a copy of a European comic reprinting Mike’s work, I sent Mike a photocopy and he was fascinated to see his artwork with foreign words. Then, for his 80th birthday, we compiled a birthday special tribute issue of EFA. The special was my idea but largely down to the efforts of John Freeman who commissioned written and artwork tributes from some of the biggest names in the comics industry - all of who were happy to work for free to pay tribute to Mike! Mike said of this issue 'Very many thanks for the copies of EFA carrying your birthday greetings on my 80th, which I found very moving - and heart warming to read the messages from the people who contributed to the issue.'

Mike’s generosity is perhaps best illustrated by the fact that he drew two original pictures for EFA, one of which featured The Sarge from Battle (my favourite Mike Western character) and which I used as the cover of our sixth issue.

Mike and I exchanged Christmas cards, his hand-painted efforts (illustrated) far outshining the mass-produced cards I sent him! Last year, I did not receive a card and I worried that it might be because his health was failing him.

Mike, I never met you but you were a pleasure to communicate with.
Mike Western interviews at: http://fanboy.frothersunite.com/DarkiesMob_western.html
Posted by Ian Wheeler at 7:09 pm

Thankyou for posting these kind words about my Dad - I hope you don't mind if I use part of this in the few words I'll say about him at the funeral on Wednesday 28th May.
Thanks also for the 80th birthday tribute in "Eagle Flies Again".