Bishop is Not The Weakest Link 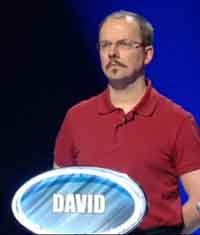 Former editor of 2000AD David Bishop did comicdom proud this week by winning BBC contest The Weakest Link. In an episode broadcast on Friday 23 May (available via iplayer for the next seven days), David beat a sports journalist for an impressive cash prize of over £1400, although he modestly gave credit to rival Graham as the better player through the actual game.

David, whose credits include the recently published history of 2000AD, Thrillpower Overload, and who writes The Phantom for Egmont Sweden will I suspect soon become quite sick of people asking him what the Milky Way is also known as based on its Greek derivation.

I expect he's got a very pointy sword to go with that dashing moustache and Musketeer-ish beard, so don't push your luck!
Posted by John Freeman at 9:35 pm