In Review: Freddie & Me: A Coming-of-Age (Bohemian) Rhapsody 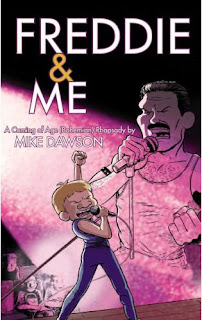 Freddie & Me: A Coming-of-Age (Bohemian) Rhapsody
By Mike Dawson

The Plot: High Fidelity meets Wayne’s World in this graphic memoir about a young man’s life-long obsession with the rock band Queen. Told alternately from Mike Dawson's childhood, teenage and adult perspectives, Freddie & Me explores the way in which music changes and shapes our lives, and the way in which random memories can both prop up and undermine the stories we tell ourselves. The counterpoint to Mike's obsession is his younger sister's love of George Michael and Wham - including several deliciously funny imagined scenes featuring a post-break-up Andrew Ridgeley - which, like the book as a whole, is written and drawn with a brilliant combination of exuberance and subtlety.

The Review: You don’t, I think, have to be a fan of Queen or Wham to enjoy British-born artist Mike Dawson’s candid autobiography, tied though Freddie & Me is to the life of rock legend Freddie Mercury as much as it is to the life of the cartoonist. As others have pointed out, most of us have had one band with which we identify, the band that was always there for us during good times and bad. That theme in this graphic novel is something we can probably all empathize with. For Mike Dawson, it's always been Queen and Freddie Mercury.

Telling his life story from early youth, emigrating to America, mourning – and celebrating – the loss of loved ones, all against a backdrop of Queen’s both real and imagined history, Dawson delivers a wonderful story of his road to adulthood. The art is very personal but accomplished, the storytelling terrific throughout as Mike navigates the perils of moving to New Jersey – where Queen, like many British rock bands were relatively unknown and his obsession with them was regarded as more than a little odd – dealing with relationships, family and, eventually job hunting and "grown up living" (as if there is ever such a thing...).

Freddie & Me is a no-holds-barred blend of great humour and touching moments, particularly as Mike comes to terms with the death of his grandmother and, indeed, the death of his childhood idol. The imagined appearances by Freddie Mercury, Brian May, George Michael, and Andrew Ridgeley (among others) are an added and entertaining bonus.

If you’ve ever followed one band to the exclusion of all others, you’ll empathize with Mike Dawson’s narrative: and if you’re a Queen fan, you’ll find much to identify with in this comic tribute to Freddie Mercury. Freddie & Me is a great, original and rewarding read and I enjoyed it immensely.

• Mike returns to Britain next month to promote his book with an appearance at the Institute of Contemporary Arts in London on 11 June, alongside Mio Matsumoto (author of My Diary), Woodrow Phoenix (Rumblestrip) and Warren Pleece (Life Sucks).

• Buy Freddie & me from amazon.co.uk

• Buy Freddie & me from amazon.com

• Carl Hays, Booklist
“Graphic novels rarely come more deeply personal than Dawson’s autobiographical chronicle. Departing from the dot-com slacker humour of his comic book Gabagool!, he explores his lifelong obsession with the UK rock band Queen. His Proustlike moment of remembrance arrived after seeing a performance by a Queen tribute band and realizing that “When I think of Queen, I can remember my whole life.. Anyone who has ever obsessed over a music icon, be it rock group or charismatic crooner, should identify with Dawson in this poignant, charming memoir.”

• The Johnny Bacardi Show
“I suppose it's said that the best autobiographical works are those in which the reader can find a bit of themselves therein; that's certainly the case with me as I read Freddie & Me. I'm several years older than Mike, but I can strongly relate to his attraction to the music and image of Queen, similar to what I felt when it came to the Beatles, Nilsson or Bolan to name a few.”

• Entertainment Weekly
“Dawson anoints Freddie Mercury, frontman of Queen, "a messenger from the gods" and the spandexed muse stands at the heart of this memoir. In his paean to adolescent angst, Dawson breaks into song in the school cafeteria, rethinks his social life after Mercury's death, and feuds with his George Michael-loving sister. For Fans of... Nick Hornby's High Fidelity. Bottom Line: Though undeniably contagious, Dawson's rawkin' enthusiasm begins to slow-jam into sentimentality.”
Posted by John Freeman at 10:42 am