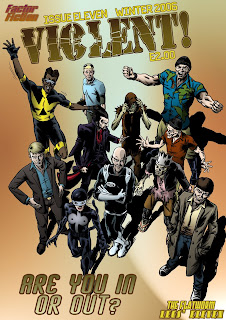 To celebrate the launch, a brand new full colour comic strip Sisters of the Head will start on The Girly Comic site on Saturday. It has been written by Doctor Who novelist Daniel O'Mahony and illustrated by small press supremo Terry “Sleaze Castle” Wiley.

Both webcomics will debut new strips, threaded alongside our ongoing project to put the entire Factor Fiction strip archive online.

"Going online will enable us to continue our mission to bring new and established comic creators to a wider audience," explain publishers Jay Eales and Selina Lock. 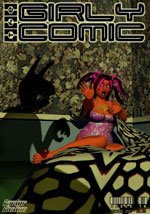 "For those who have never picked up a copy of Violent!, you'll be able to read serials such as The Flatworm, Spare Parts, MageWorks and Knuckles from the beginning. Plus, we're featuring a brand new four panel strip series: The Silent Service by Jay Eales and Paul McCaffrey."

UK Small press and Girly Comic fans will be aware that all sixteen print issues of The Girly Comic include work by autobiographical comic goddess Lee Kennedy, and Jay and Selina are very proud to be compiling an online archive of her work as part of The Girly Comic website.

"We're also excited to announce that over the coming months we'll be making all the Oddcases strips by Alistair Pulling & Bevis Musson available on The Girly Comic site. This will not only be the stories published in the comics, but also the early uncollected Oddcases strips, and hopefully some new ones."

Fans of print comics shouldn't worry - Factor Fiction has no plans to go completely digital. As part of the publishers overall plan they'll be producing book collections, including The Girly Comic Book, an as-yet unnamed Lee Kennedy Collection and compilations of the new strips featured on the sites. In the meantime, you can still buy copies of issues 1-16 of The Girly Comic and 1-13 of Violent! from the online store.
Posted by John Freeman at 7:05 am