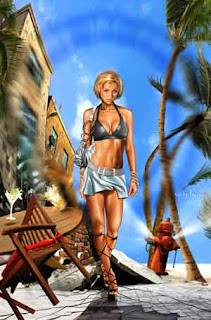 Mike Carey (X-Men, Ultimate Fantastic Four, Voodoo Child) and creator of Virgin Comics series The Stranded will be developing the story into a television series for SCI FI Channel.

“One of the purposes of our SCI FI partnership is to create television and film writing opportunities for the best talents in the comic industry. Having Mike write the television pilot for The Stranded, a comic book he created, is exactly what we had hoped for,” commented Virgin CEO Sharad Devarajan.

Mike Carey’s stunning work has earned him fans worldwide. With The Stranded, Mike challenges ordinary people to face the extraordinary – their lives are lies. Every memory is false. Startling events cause them to confront the truth, that they are, in fact, “stranded” on Earth after a horrific genocide in another galaxy.

“From day one,” Carey says, “working on The Stranded has felt like being at a nexus point of creativity. Virgin and SCI FI created the perfect platform, and then supported the book and the creative team through all the stages of development. This feels like something we all own, and we all love. I can't wait to take it forward into its next incarnation.”

"It’s all very cool," he says on his blog. "I love the core premise of The Stranded, and the cast we’ve built up. I really want to carry on telling their story, in as many different formats as I can - including semaphor where appropriate."

• The Stranded Issue # 1 was released in January 2008 and #3 goes on sale at comic shops and via available at www.virgincomicsstore.com is on sale from 26th March 26th, 2008. The first volume of collected stories will be released in July.
Posted by John Freeman at 12:18 pm