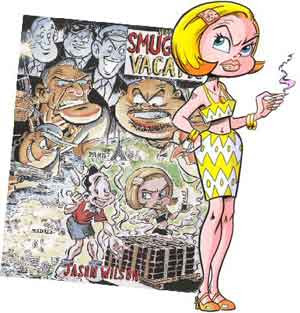 An ex-career criminal and cartoonist have come together to launch a true crime cartoon website (www.smuggling
vacation.co.uk) which introduces two unique drug smuggling anti-heroes the like of which may never have been seen before.

The site serialises the story of a young couple who discover a stash of cannabis on a Spanish beach and try to smuggle it into Britain.

The tale is the result of scores of letters sent back and forth over an 18 month period between British cartoonist Jason Wilson and a convicted but reformed smuggler, 'Smith' (now revealed as Tony Spencer), who has just completed four years of a six year sentence for smuggling hashish in Spain.

"After a two-year period we finally completed the 75 page adventure that took the dealers, growers, black marketeers and smugglers we both knew and made them the stars and cast in the tale of two Brits abroad who come across the opportunity of a lifetime," says Jason.

"The result is a unique book, mixing fact and fiction like no other book could. Many of the characters have been based on real life criminals although the names have been changed to protect the guilty."

Aimed at the 15-35 age group, male and female, Jason warns it's definitely not a story for the "conservatively minded and the humourles," and tells downthetubes the story is already attracting a growing audience from the British, French and Dutch webcomic and cannabis communities who tune in each week to see how far the amateur smugglers have got in their quest to smuggle the tonne of cannabis back to the UK.

Jason has stepped up promotion of the site with the imminent publication of the print edition of the comic. Jason is currently looking for simple but effective means to distribute, sell and promote the print version to UK comic buyers.

• For the latest news, visit the web site and read Jason's blog on developments, which include plans for a second book.
Posted by John Freeman at 11:28 pm