UFO and Battle of Britain Dinky Toys on eBay 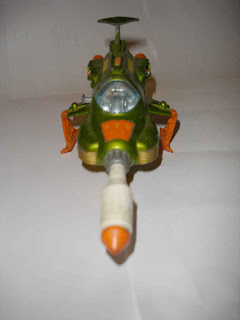 A few Dinky toys for sale from me on eBay at present, with just one day to run, some of which may be of interest to readers here:

• Dinky UFO Interceptor
Dinky Toys 351 - UFO interceptor from Gerry Anderson's UFO series. For some reason, Dinky inexplicably decided not to go with the colours of the TV series when this model was released in the 1970s and gave this model a green paint job. Condition is as evident in photographs - some bending to the landing struts but otherwise intact and includes missile. No box. Fans generally recommend re-painting to match the show's colours!

• Dinky Spectrum Pursuit Vehicle (SPV)
Dinky Toys 104 - The Dinky Spectrum Persuit Vehicle. cost 22/11 in May 1969. This vehicle is probably only of interest to those seeking parts: there is no missile and there is a fault with the missile launcher 'hatch' which could probably be fixed by someone with experience. Decals also missing but Captain Scarlet figure and treads on back of vehicle are intact.

• Dinky 719 Vickers Supermarine Spitfire Mk II
Dinky Toys 719 - Vickers Supermarine Spitfire Mk II, with battery powered propellor (requires D23(?) battery which may no longer be made and untested) and flip down undercarriage (intact). The model was first released in 1969 and production continued until 1976, as one of several Dinky aircraft diecast models. Unboxed. Please note there's damage to the 'aerial' to rear of cockpit.
The real Spitfire Mk II, employed in World War Two, were first delivered to 611 Squadron in August 1940, replacing the Mk I with a more powerful Merlin 12 engine and improved performance.

• Dinky 721 Junkers JU87B Stuka
Dinky Toys721 - Junkers JU87B Stuka. This model comes complete with detachable cap bomb, triggered by release mechanism on side. Paint work is in good condition. The underside wing decals are loose but I have them and will send with the model. This model was first released in 1969 as one of several Dinky aircraft diecast models.
The real Junkers Ju 87, or Stuka as it became universally known, (from Sturzkampfflugzeug or German: dive bomber) was a German combat aircraft operational from 1937 and throughout World War II. Some were fitted with an infamous Jericho-Trompete (Jericho Trumpet) wailing siren — though the siren was only fitted to a few aircraft because of the extra drag induced on the rather slow aircraft.

• Dinky 710 Beechcraft Bonanza S35
Dinky Toys 710 - 710 Beechcraft Bonanza S35. Released in the 1960s in a red and white finish, this model is showing its age, with some paint damage but propeller is intact and removable engine 'hood' is present.
The real plane on which it was based was first flown in 1947 and is still being produced by Hawker Beechcraft so this model may appeal to an owner (17.000 have been built to date).
Posted by John Freeman at 11:10 pm