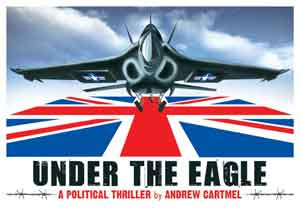 Under the Eagle, a new play from author, script writer and former Doctor Who script editor Andrew Cartmel has just begun a three week run at the White Bear Theatre, London.

Directed by Conrad Blakemore, Andrew says the play is a darkly humorous political drama exploring the nature of Britain's 'special relationship' with the United States. When stand-up comic Vi Hooper becomes the reluctant weekend guest of the Prime Minister’s wife, she encounters the US President and gains an unexpected insight into the corridors of power.

Francesca Anderson, whose credits include As You Like It and Godspell, Angela Dixon (seen on TV in No Child of Mine and appearing in the new film Oscar opposite The Bill's Mark Wingett), David Morley Hale, Eve Pearson, Jonathan Rigby and James Sobol Kelly.

Director Conrad Blakemore has worked in the fields of theatre, film and photography. His recent productions include The Lodger (Time Out Critics' Choice), his own adaptation of Strindberg's Miss Julie, Roulette at the Finborough and Happy Christmas at the New End Theatre.

Andrew's previous play, End of the Night, was hailed as an "entertaining, stylish intrigue".

Email ThisBlogThis!Share to TwitterShare to FacebookShare to Pinterest
Labels: Doctor Who, Events, Theatre