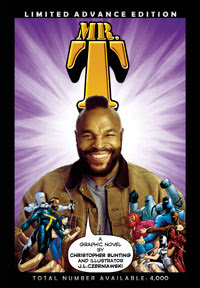 Preceding the worldwide launch of their Mr. T graphic novel in summer 2008, British publisher Mohawk Media has announced that they are celebrating with a special Limited Advance Edition.

With a total number of only 4,000 copies, Mr. T: Limited Advance Edition - described by Mohawk as an all-new adventure written by Chris Bunting, who also worked on the short-lived AP Comics title launched with considerable press attention back in 2005 - is now available via Mohawk's web site (www.mohawkmedia.co.uk).

The book is drawn by J.L. Czerniawski, who has worked in both the fantasy and comic book industries, including providing art for such properties as Transformers (for IDW) and, with the movie’s director Joe Carnahan, Smokin’ Aces.

Mohawk says it marks the return to prominence of Mr. T, the Mohawk muscleman who was voted the fourth “Greatest American” in a 2003 global BBC poll (behind Homer Simpson but ahead of George Washington and Franklin D. Roosevelt).

"It’s great to be the star of a graphic novel," says Mr. T. "And great entertainment is always driven by great writing!’

‘There’s my long-time fans, but there’s also a new generation because of The A-Team reruns, my cartoon show reruns, and the renewed interest in Rocky III following the recent sequel," he continues. "That’s humbling, and this graphic novel is my method of reaching them all. I’m so proud of all my life’s work, but to see myself in this book feels extra special."

"We’ve seen comebacks happen over and over again in the entertainment industry, whether it's John Travolta, the Spice Girls, or fictitious characters such as Indiana Jones or Rambo," adds Chris Bunting. "Now it’s Mr. T’s time."

Mr. T last appeared in comics in 2005 from British publisher AP Comics, spearheaded by writer Chris Bunting (interviewed here about that project) and pencilled by Neil Edwards, with inks from Randy Emberlin. Mr. T was also involved in that project as a Creative Supervisor on the series, but it ran for just two issues and disappeared in a storm of controversy widely reported in the comics press. US publisher NOW Comics published 14 issues and one annual of Mr. T and the T-Force, written by Pete Stone with art by Neal Adams back in the early 1990s.

• Mr. T: Limited Advance Edition can be ordered direct from publisher Mohawk Media at www.mohawkmedia.co.uk for the exclusive price of £15.99 / $39.00 including delivery. Alternatively, from April 2008, it will be available through bookstores worldwide, including online, by quoting its 13-digit ISBN: 9780955680403.
Posted by John Freeman at 10:30 am

Email ThisBlogThis!Share to TwitterShare to FacebookShare to Pinterest
Labels: Books

Got it!! And I'm taking it to read on a plane of all places. If i can wait till tomorrow.