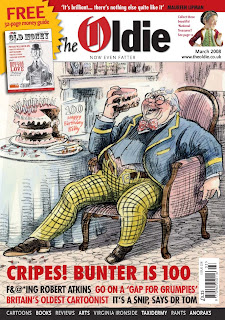 In celebration of his 100th birthday Willaim Geoge Bunter, better known of course as Billy Bunter, features proudly on the cover of the Oldie magazine this week.

The fat owl of the Remove alos had radio programme dedicated to him this week. It was on Radio 4 on Tuesday (19th, at 11:30 am) and was entitled 'Billy Bunter's Birthday Bash' and was presented by Gyles Brandreth. It'll be on the radio 4 website for a bit I'm sure.
Posted by Richard Sheaf at 8:35 am