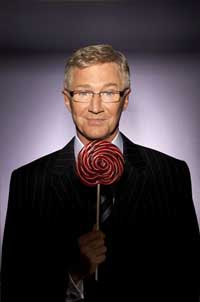 No stranger to celebrity appearances, the fourth season finale of Doctor Who is to feature Paul O'Grady, according to The Sun.

The TV presenter will play himself discussing "strange goings-on" during his chatshow as David Tennant's Doctor departs on a mission.

A BBC source told The Sun that O'Grady had been wanting to appear on the show for some time and his role would be a little more "sinister" than people are used to. (There's no word on whether or not his canine sidekick Buster will play his evil side by weeing up the side of the TARDIS).

Doctor Who has seen many celebrity appearances down the years, including Ken Dodd, Hale and Pace and others, some more well received than others. In addition to his work as a popular chat show host, Paul O'Grady has had a successful acting career on stage and on televsion, in addition to his performances as acerbic alter ego Lily Savage.

"Paul has been desperate to be on the show for ages and asked if he could be a guest star," revealed the BBC insider. "Fortunately, Russell T Davies is a big fan of his too, and jumped at the chance.

The scenes will apparently be shot on the set of Channel 4's Paul O'Grady Show, which is recorded at London's BBC TV Centre.

There's no word as yet if Paul O'Grady's own companions, either dogs Buster or Olga, will make an evil appearance by weeing up the side of the TARDIS...

• The fourth season of the modern Doctor Who is expected to begin screening in April.
Posted by John Freeman at 10:43 am