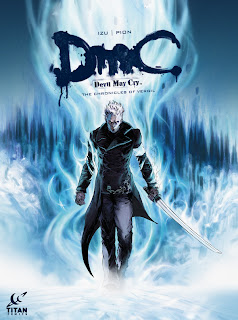 Titan Comics has just released the first issue of Devil May Cry: The Vergil Chronicles comic, based on the all-new re-imagination of Capcom’s world-famous  eponymous videogame saga.

Both issues of the two-part 'prequel' comic series are already available digitally, to tie in with the recent release of Capcom’s newest and highly rated videogame installment of DmC Devil May Cry.

The DmC comics prequel takes place a few months before DmC Devil May Cry, revealing the crucial backstory of Dante and his twin brother Vergil; with never-before-told revelations about these iconic game characters.

Just-translated for a simultaneous release with the French comic edition, the story, in the vein of Titan’s Assassin’s Creed graphic novels, is written by Guillaume Dorison aka Izu (Omega Complex) and illustrated by artists Robin Recht (The Third Testament) and Patrick Pion (Tomb Raider: Dark Aeons).

The Devil May Cry video game series has sold over 11 million copies worldwide, spinning off into an animated series, graphic novels, manga, action figures, statues, clothing and more. The franchise has also just been picked up for adaptation by Screen Gems, the studio that produced the blockbuster Resident Evil movies.

The next installment sees Capcom collaborating with UK based developer Ninja Theory to explore new frontiers for the series. Set against a contemporary backdrop, DmC Devil May Cry depicts a duplicitous world where nothing is ever as it seems and the line between good and evil is constantly blurred. The franchise’s hero Dante bursts into this world wielding the series’ signature mix of sword and gunplay but adds additional weapons, all new powers and a revitalized gameplay system as players navigate the rich, interactive environment.

• The digital editions are available for the iPad, iPhone, Web, Android and Kindle Fire, exclusively through the comiXology app and comixology.com.