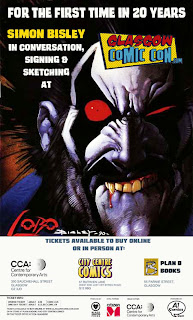 There's an impressive line up already announced for this year's Glasgow Comic Con, which will take place at the CCA Glasgow.

GCC is Scotland’s number one comic book festival, bringing in people from across the UK to celebrate the art or creating comic books.

The organisers tells the event has grown from a love for the medium and hole in the market place - and no doubt helped by Glasgow's position as a major centre of comic book creators.

A recently announced addition to an already impressive roster is Eagle and Eisner Award winner Simon Bisley, an artist best known for his work on 2000AD's ABC Warriors  and Sláine, along with Judge Dredd/Batman and DC Comics Lobo. His work has inspired various forms in media, including the Beast in the 2006 Doctor Who episode “The Satan Pit” and Simon Pegg’s character Tim Bisley on Channel 4[s sitcom Spaced. 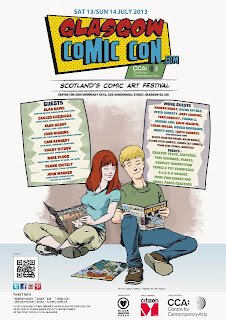 The event will also host the awards ceremony for the Scottish Indie Comic Book Alliance Awards, dedicated to the promotion of local comic books, graphic novels and sequential art in its many forms and comic creators; artists, writers, colourists, letterers, designers or editors. Winners from the 2012 SICBA awards include writer John Lees and artist James Devlin, as well as an Outstanding Contribution to comics award to David Alexander.

• Nominations for the 2013 SICBA awards are now open at www.sicba.org.uk