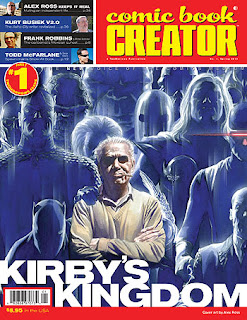 Orbital Comics in London have announced a special discussion panel to celebrate the launch of the new Comic Book Creators magazine from Twomorrows Publishing, taking place on Saturday 8th June.

Learn more about how John Morrow and his wife started with the Jack Kirby Collector back in 1994 - and the profound effect Kirby had (and continues to have) on comics, as well as the members of the panel.


Comic Book Creator #1, on sale now via comic shops, is TwoMorrow's newest magazine edited by Jon B. Cooke, devoted to the work and careers of the men and women who draw, write, edit, and publish comics, focusing always on the artists and not the artifacts, the creators and not the characters. Behind an Alex Ross cover painting, the frantic first issue features an investigation of the oft despicable treatment Jack Kirby endured from the very business he helped establish. From being cheated out of royalties in the ’40s and bullied in the ’80s by the publisher he made great, to his estate’s current fight for equitable recognition against an entertainment monolith where his characters have generated billions of dollars, we present Kirby’s cautionary tale in the eternal struggle for creator’s rights.

Plus, CBC #1 interviews artist Alex Ross and writer Kurt Busiek, spotlights the last years of writer/artist Frank Robbins, remembers comics historian Les Daniels, talks to Todd McFarlane about his new show-all book, showcases a joint talk between Neal Adams and Dennis O'Neil on their unforgettable collaborations, as well as throws a whole kit’n’caboodle of other creator-centric items at you.

Taking part in the discussion will be:

Chris Thompson (chair)
Chris is a podcaster, blogger and host known for his work on Pop Culture Hound and The Orbiting Pod. Web: www.popculturehound.com

John Morrow (writer, publisher)
John is the co-founder of Twomorrows Publishing which has been publishing the Jack Kirby Collector since 1994. Web: http://twomorrows.com

Jason Atomic (artist, Hail To The King curator)
Jason is an artist, writer and curator who work has been inspired and affected by various aspects of pop culture. Web: http://jasonatomic.blogspot.co.uk

This discussion will be recorded for a special edition of the Orbiting Pod.
http://www.orbitalcomics.com/podcast/
Posted by John Freeman at 6:00 pm