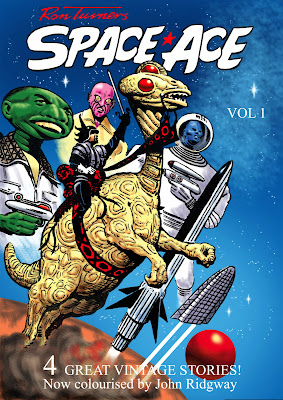 "Space Ace was a labour of love for Ron," says John Lawrence, who was Ron's agent, in his introduction to this collection. "It attracted possibly the lowest page rate ever compared to much of his other work, but it was free from any editorial constraints ... His enjoyment shines through in the four stories I've selected... These stories originally appeared in black and white, but now, for this publication, Ron's marvellous artwork has been enhanced by the superb colouring of John Ridgway, an artist absolutely in tune with Ron's own colouring sensibilities." 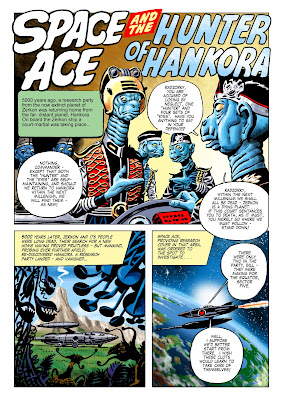 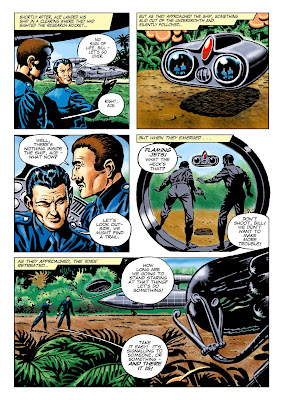 The Review: While Ron Turner wasn't the first artist to work on Space Ace, a character first appearing in Lone Star but who later gained his own title in the 1950s, published by Atlas, he made the character his own during his time on the strip.

(The strip was taken over by the Selecciones Ilustradas agency on his departure - Turner was to go on to drawing many covers for magazines such as Practical Mechanics, drawing The Daleks for TV Century 21 and more, right up until his death in 1998).

The central character was Ace Hart, sheriff of Tarrant County Texas, who is struck by a meteorite and gains immunity to radioactivity. He becomes Space Ace, Space Squadron Commander, captaining the new spaceship LS1, aided by a crew that at one point included an inventor and a monkey but, by the time of the strips in this volume, is partnered only by Ace's NCO, Sergeant Bill Crag. 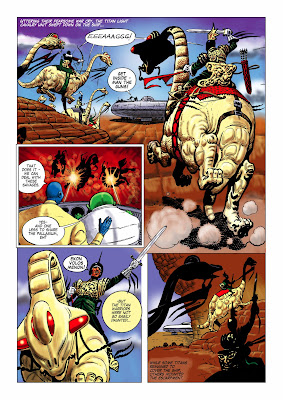 Produced by John Lawrence, this first volume of Space Ace tales presents four complete stories from Lone Star Magazine and Lone Star Annual. (Together with Philip Harbottle John created Nick Hazard: Interstellar Agent in the 1990s, which was illustrated by Ron in black and white originally, but more recently was also re-coloured and re-formatted, also by John Ridgway).

The Space Ace strips were drawn in the early 1950s - a period in which Turner also drew Rick Random - Space Detective for Fleetway's Super Detective Library. While Rick Random is perhaps better known - and there too, Turner gave that strip a distinctive look - Space Ace has a similar quality, enhanced further in this edition by John Ridgway's tremedous work on colouring the stories.

While the stories themselves are positively quaint in comparison with today's SF – humanoid Martians rubbing shoulders with other bipedal aliens as well as humans – there's no disputing Turner's flair for designing stylish future vehicles and buildings.

This 40-page collection may have a high cover price but it's a price on a par with similar short-run comic magazines such as Spaceship Away and definitely something fans of Ron's work should be tracking down.

John Lawrence has produced this first Space Ace as a non-profit publication, purely for the love of Ron Turner’s work. The number of copies sold that will determine whether or not there are future volumes published.