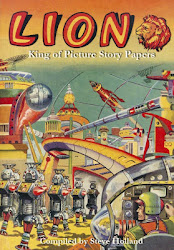 
The Book: A history of the famous Lion weekly, which ran from 1952 until 1974. Steve Holland tells the story of Lion’s creation and development in four detailed chapters, before proceeding to catalogue all the strips, text stories and features in the weekly, the annuals and the Summer Specials, with publication dates and remarkably full details of writers and artists. The book is fully illustrated in black and white, with individual pages from every continuing strip in the weekly.

The Review (by Steve Winders): Unlike its more famous contemporary, Eagle, which has spawned many books, this is the first work devoted to Lion, a paper which began as a much inferior rival to Eagle, but which steadily improved through the 1960s as Eagle declined and was eventually absorbed by it in 1969. Author Steve Holland is a comics enthusiast of long standing and has gathered his information together over many years. Consequently it is accurate and highly detailed. (I spotted just one inconsequential error in the whole book and that was not about Lion, but Eagle, which moved to web offset printing in September 1967 and not January 1968).

His narrative explores the successes and failures of the paper and examines the contributions of editors, writers, artists and strips. He also provides details of sales figures and management changes, which were so important to the direction that the paper took.
Following the narrative, the book features short interviews with the paper’s first editor, Bernard Smith and with Barrie Tomlinson, who worked on Lion early in his career. These are followed by the full and detailed index of all Lion’s contents.

I was surprised by the large number of characters who appeared in Lion over the years. These include the familiar favourites Captain Condor, Robot Archie, Zip Nolan, Paddy Payne, The Spider and Adam Eterno, as well as the more obscure Red Knights of Morda, Oddball Oates and The 10,000 Disasters of Dort.

The book may seem expensive, but this is a specialist publication with a limited print run, published by the author and designed to appeal to the dedicated fan. It serves as a reminder that for all the many and varied books that have been written about Eagle over the years, none has explored its whole history in such detail. I have no hesitation in recommending this informative book.

• For more information on how to purchase Lion - King of Story Papers, visit the Bear Alley Books web site