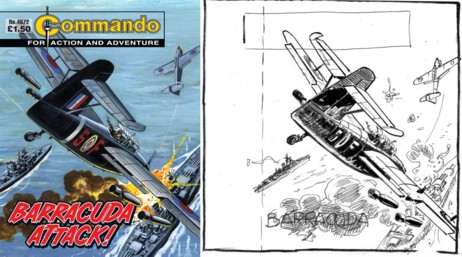 Our brothers in arms in the Commando office in Dundee are rather keen on their Facebook page and, as well as posing questions and giving out information on their titles, they have a extensive collection of Commando covers in their photo section in addition to a selection of photographs that they have either used as references for Commando artists or simply unusual military photos that they have come across.

They have recently added some initial pencil sketches for Commando characters and covers - and two of the issues the cover prelims are for are amongst the current batch of four Commando comics in the shops at the moment.

Issue 4572 is Barracuda Attack!, written by Bill Styles and with internal art and cover by Carlos Pino, and we have to say that Pino has found an angle on the Royal Navy Fairey Barracuda dive-bomber that almost makes this very ugly design of a plane look good. 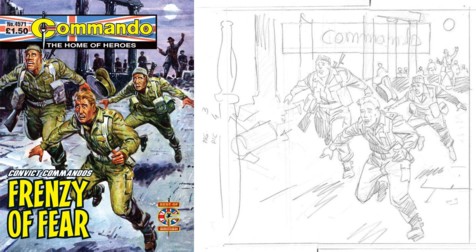 The other cover prelim is for the current story in the Alan Hebden's Convict Commandos series, issue 4571 Frenzy Of Fear. Artist Benet, who did both the internal and cover artwork, shows the commandos running from a German unit and, looking at his cover prelim, it is worth remembering that Commando cover illustrations are square and therefore wrap-around onto the back cover of the comic where they meet the back cover image of the "Commando Dagger", the Fairbairn–Sykes fighting knife.

Both these issues of Commando are currently on sale in WH Smiths, Easons and other High Street newsagents.

There are more details of Commando on their official website and Facebook page.
Posted by Jeremy Briggs at 7:00 am