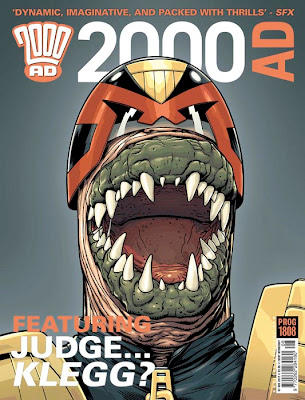 The co-creator of Judge Dredd, John Wagner, has praised "Cold Deck", the latest Judge Dredd serial in 2000AD - a storyline by three of British comics’ top writers that has electrified the fan base.

The audacious plot twist in last week’s Prog 1807 by Al Ewing, Simon Spurrier  and Rob Williams was “a little bit of comics genius”, said the man behind many of the title’s most popular characters.

And the critics agree - Comic Book Resources’ Robot 6 blog called it “an instant classic” while chaoshour.com described the opening episode in Prog 1806 as “the kind of comic that reminds you of why you fell in love with comics in the first place.


"Writer Al Ewing’s talent at making even the most insignificant characters come to life is evident here, as is his wonderful take on the ruthless attitude needed to succeed in a political environment," chaoshour reviewer Gareth Davies enthuses. But it’s his depiction of Dredd that sticks with you, the way that even he must now force himself to carry on with his duties.

"It’s a subtle touch, but one that strikes a nerve. After all if the toughest judge on the beat is finding it hard to keep a grip on things, what hope does anyone else have?

Now readers who have missed the story so far can read the prologue of Al Ewing’s story, Judge Dredd: Cold Deck from Prog 1802, absolutely free (PDF link). With art from Henry Flint, this six-page opening episode is, 2000AD tell us, the beginning of the biggest Dredd story since Wagner’s year-long Day of Chaos changed the world of the lawman of the future forever.

• Prog 1804 and the issues that follow are available digitally from the 2000 AD online shop or through the 2000AD iPad/iPhone app.