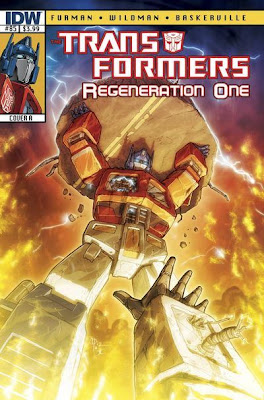 Simon Furman, the comic creator who single handedly has probably done more to shape the mythology of Hasbro's Transfomers than any other over the past two decades (and counting) is promising an epic battle in #85 of IDW's latest Transformers title, Transformers Regeneration.

Out on Wednesday (7th November) Simon acknowledges that with this climax to his "Loose Ends" story arc "Pretty much everyone now knows it features what I hope is the most titanic and revealing Prime/Megatron clash ever.

"I’d always felt vaguely unsatisfied that the two towering titans of Transformers-dom had never really had an appropriately epic smackdown in the (original) comic series," he reveals in a blog post. "Circumstances and story direction just seemed to have them in different corners of the storyline, or the clashes would end in stalemate. When I came on the (US) book, with issue #56, the first thing on my mind was to get Megatron back in the fray. But through twists and turns (of my own devising) somehow I could never get them face-to-face, toe-to-toe (if you discount the Mega-Ratchet combo fight with Prime, where it’s fair to say Megatron wasn’t exactly feeling himself).

"So uppermost in mind when we got to continue the saga beyond its abrupt conclusion in issue #80 (in Regeneration One), was to put that to rights, to accelerate Optimus and Megatron into a showdown where all bets are off, the stakes and surrounding elements too mighty to brush off with an inconclusive draw (another stalemate was just not on the cards).

"In one corner, you’ve got Prime, who’s been head in the sand for the past 20 years, in the other Megatron, who’s been laying waste to Earth with almost the sole aim of sticking it to Prime and getting his attention. Well, now he’s got it — big time. The gloves are well and truly off.

"...As well as a totally titanic battle, I really wanted to get under the skin of the truly time and space-spanning grudge these two characters have," says Simon of the issue, which features art from Andrew Wildman and Stephen Baskerville. "I wanted to understand this strange, almost symbiotic relationship a little more, before, well, it ends. Forever.

"All I can say is, whatever you might think you know from the covers and forums and whatever else has engendered a mountain of speculation, think again. Nothing can be taken from granted. And the Prime/Megatron clash is just one part of this packed issue!"

• Read more about the issue, created by a near all-Brit team, on Simon's blog here