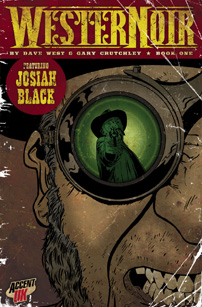 Writer Dave West and artist Gary Crutchley take us to the Old West where they introduce us to the character of Josiah Black in the first book of Accent UK's supernatural WesterNoir.

In the Lucky Star Saloon in the town of Moses Creek, former sheriff Josiah Black is approached by Mrs Greta Anderson who wants him to find Jim Wilson, the man who killed her family. She is prepared to pay Black for his time and when he finds Wilson, she wants Black to kill him. Black agrees to find Wilson and the owner of the local livery stables points him towards the Plunkett homestead. Riding there, Black is just in time to see Wilson kill the husband of the house but prevents him killing the wife as Wilson raves about the family being demon spawn. It would seem that there is more to the story of Greta Anderson than she has let on.

Writer Dave West has come up with a complex character in the form of Josiah Black by hinting at his background through Mrs Anderson's knowledge of him as well as having his thoughts in text boxes on many of the panels.This is no simple killer for hire as he realises just what is going on around him. Artist Gary Crutchley's black and white artwork shows much in the long shots while ignoring backgrounds in the close ups which seems to give a more more immediate or intimate feeling to those panels in which the eye is not distracted from the main characters. 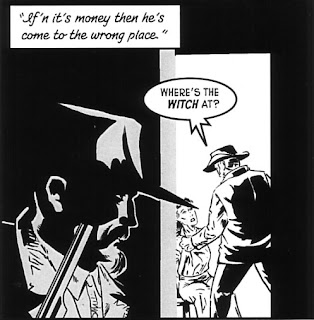 The supernatural aspect of the story comes to the fore in the second half of the book and while reminiscent of Frontier in The DFC, this is a much more mature take on the concept than the children's comic could ever have portrayed. Indeed the book has a four page backup strip which adds a little more depth to the character of Jim Wilson as well as three pages of his journal that Black is seen reading towards the end of the story.

Credit must also go to Accent UK designer Andy Bloor for the overall design of the book making even the non-story pages interesting to look at and doing a striking job on the distressed look of the covers and spine - there was more that one occasion when I found myself wiping the cover to get rid of a non-existent mark or crease that was actually part of the image.

WesterNoir Book 1 is a remarkably well produced book with an intriguing character at its core. With Book 2 due to be released at Thoughtbubble 2012 it will be interesting to see just where this four book storyline takes us.

• There are more details of WesterNoir on the Accent UK website.

• There are more details of Dave West's work on his blog, Strange Times.

• There are more details of Gary Crutchley's work on his blog, Driblin' On.

• Accent UK will be selling their range of books including WesterNoir at the Comica Comiket Fall 2012 Independent Comics Fair in the City Of London on Saturday 10 November 2012 and at Thought Bubble's New Dock Hall in Leeds on the weekend of 17-18 November 2012 when WesterNoir Book 2 is scheduled to be released.