Tough of the Track runs to The Mirror 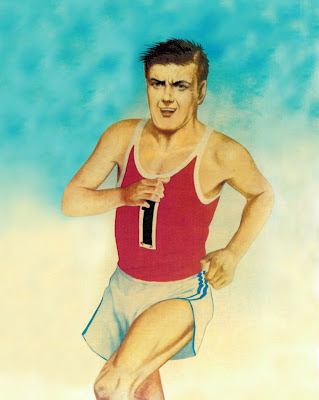 Working-class, chips-addicted hero Alf appeared in DC Thomson's boys' comics The Victor and The Rover for over 50 years as he took on and beat snooty opponents  with his catchphrase "I've run 'em".

The Tough of the Track has been revived in a new and exclusive story featuring a surprise guest, coming out of retirement for the Run with help from his new training partner – Ethiopian superstar Haile Gebrselassie.

The strip will run online tomorrow, after its debut in the print edition. Grab a copy before it's wrapped around tonight's fish and chip suppers.

Prion Books are publishing A Best of Alf Tupper collection next month, celebrating The Tough of the Track - The Victor's most popular hero,  instilling the competitive spirit into millions of British lads for over 50 years.

A welder who worked under railway arches, Alf Tupper survived on a diet of fish and chips. He was always the underdog, running against posh toffs who devised underhand ways of keeping him off the winner's rostrum. Although Alf often looked beaten, he nearly always came through in the final few strides, exclaiming "I've run him!" as he breasted the winning tape in a photo-finish.

Prion says this nostalgic anthology will not only be the perfect gift for the millions of men whose love of sport was kindled in their youth by Alf Tupper, but will also enthrall and inspire a new generation of boys to go and win against all the odds.