Jokers in the new Pack of Commandos

Here's the intel on the new Commando war comics, on sale now in all good British newsagents...

I recently had a chance to sit down with Commando editor Calum Laird as part of my working day and discuss the future of comics – and digital comics. While he was as canny as ever about Things to Come, I got hints of possible new Commando-related projects in the offing, with a promise of official news as soon as anything was confirmed. Can't wait! 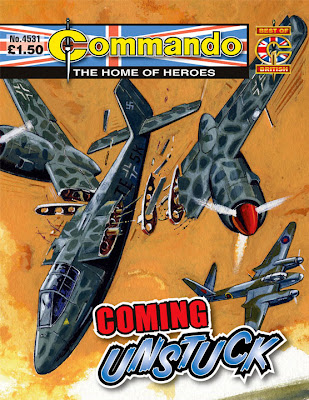 By 1943 the Germans, desperate to counter, the RAF's superfast wooden fighter-bomber, the de Havilland Mosquito, began to build the Focke Wulf Ta154. It was even known as the Moskito!

They soon discovered that holding its wooden structure together wasn't as easy as they thought, and several broke up in in flight. The glue they needed to hold their airframes together was a secret formula only manufactured in Britain.

So the Germans came up with a plan to steal some from the source…only to come up against a bunch of plucky Brits determined to stop them - or come to a very sticky end! 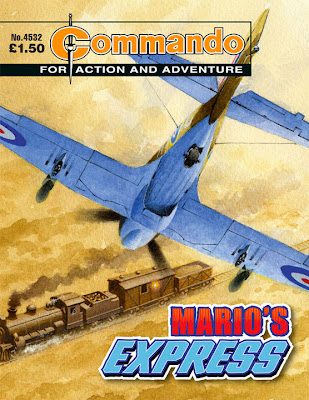 Colonel Mario Girotti was not really much of a soldier. He was more than happy to be stuck in the North African desert, in charge of a rarely-used railway station. He spent his days listening to classical music on his trusty gramophone or reading poetry.

But the culture-loving Italian's peaceful war was rudely interrupted by the arrival of a group of his fellow countrymen, followed by some Nazis, all bent on escaping the oncoming British onslaught with some looted priceless treasure and, naturally enough, they wanted one of Mario's trains.

Mario decided that maybe the time was right to fight after all! 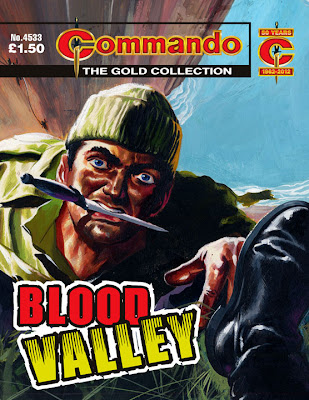 Every path that led upwards from Blood Valley to the Nazi-held fortress of Cassino was a path of death. On these bullet-swept slopes many a hero had been born - and had died. But still the German flag flew triumphantly from the battlements.

And then the Commandos were sent for - hand-picked Commandos who had their own cunning and courageous ways of bringing arrogant Nazis to their knees.

Here is their heroic story.

“There's a saying that you shouldn't judge a book by its cover, but in this case it's exactly what you should do! Ken Barr's Commando is loaded with contained menace and pent-up ferocity,” says editor Calum Laird of this story. “Make no mistake, author Dorward is going to put a hard-hitting story in front of you with very few punches pulled. Those of a nervous disposition should look away now.

“The inside art, with Philpott's characteristic dark and brooding lines, backs up this hard edge. At times it's difficult to remind yourself that this really is fiction." 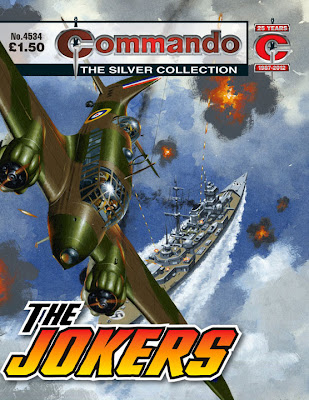 Alf Cunningham and Percy Potter were the jokers in the pack. Oh, they were good pilots, all right, it was just that they had a nasty habit of landing themselves, and everyone around them, in deep trouble. Not exactly the best pair of men to rely on when there's a German cruiser on the loose in the English Channel!

“The main conflict in this European World War 2 tale is, naturally, between British and German forces,” notes deputy Scott Montgomery of this re-presented tale. “However, there is another conflict going on. One between a couple of rebellious RAF pilots - the “jokers” of the title - and a stuffed shirt Royal Navy officer who they manage to continually annoy.

"Commando thrives on extra story flourishes like this and author Peter MacKenzie keeps the narrative flowing well, as does artist Keith Shone. And, of course, kudos to veteran illustrator Ian Kennedy for yet another stunning aircraft cover - this time of an Avro Anson right in the thick of the action."

• Steadfast! the Commando artwork exhibition at The Gordon Highlanders Museum in Aberdeen runs until 30th November 2012. There are more details about the exhibition on the museum website.
Posted by John Freeman at 1:48 pm

maybe Mario Girotti is a reference to the real name of the Italian actor Terence Hill?

maybe Mario Girotti is a reference to the real name of the Italian actor Terence Hill?