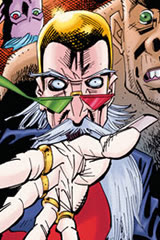 The BD and Comics Passion Festival is back in London later this month - and we're delighted to announce DownTheTubes has two pairs of tickets to give away for their Pat Mills and Kevin O'Neill event, titled "London and Other Realities"

This is the second festival organised by London's L'Institut Francais in association with Comica Festival, it's intended for fans of comic books, graphic novels and bandes dessinées.

Pat Mills is the creator of 2000AD, developing its main character Judge Dredd and many popular stories such as Sláine and ABC Warriors. He worked alongside Joe Colquhoun (Charley’s War) and Kevin O’Neill (Nemesis the Warlock and Marshal Law). He is currently working on a screenplay for Subotica Films and writing his eleventh volume for best selling graphic novel series Requiem with Olivier Ledroit.

Kevin O’Neill is one of Britain’s greatest comic book illustrators. Although his art got him in trouble with his publisher IPC in the past for being “too violent and disturbing,” his distinct style has gained him great popularity. He has produced art for The ABC Warriors, Tharg the Mighty, 2000AD, co-created Marshal Law and Nemesis the Warlock with Pat Mills as well as The League of Extraordinary Gentlemen with Alan Moore.

To win tickets to see Pat Mills and Kevin O'Neill's talk, simply answer the question below and send your answer, together with your contact details, including phone number, johnfreeman6-bdl@yahoo.co.uk.

What is the theme of Pat Mills and Kevin O'Neill discussion at the BD & Comics Passion festival on Saturday 26th May 2012?

With nearly 30 events including live drawing, talks, exhibitions, workshops, a drawing jam with Mesparrow and a dress-up party, the team behind it say this innovative festival will have something for everyone.

In addition to the official web site (www.bdandcomicspassion.co.uk )  there’s also a Facebook page for the Festival.