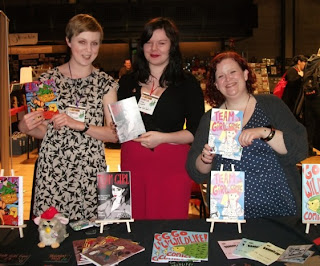 The Glasgow-based Team Girl Comic collective have been active in Scotland for the last couple of years selling their main Team Girl Comic title, as well as the individual contributors own titles, around the various comic shops and events in Edinburgh, Dundee and Inverness as well as in their hometown. With back issues selling out and a new issue due in the summer, the TGC team, including editor Gillian Hatcher (left) and contributors Coleen Campbell (centre) and Clare Yvette (right), are now looking to get their main title onto a firm financial footing with a Kickstarter initiative.

TGC editor Gillian Hatcher says on the Kickstarter site, "In the past, we have funded Team Girl Comic entirely by ourselves, with no external support. It’s great to be independent, but it also limits our print runs. Raising money through Kickstarter will enable us to print more comics with more content. We’re also hoping to use any extra funding to reprint the now sold-out TGC issues 1 and 2, to keep all you completists happy! Our overarching reason for asking you to offer us a little bit extra this time round is to help Team Girl Comic take a step toward becoming more sustainable in the long term." 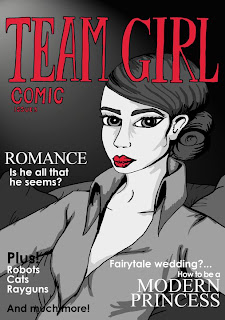 Their aim is to raise $1000 before Friday 8 June 2012 to fund the publication of TGC issue 5 in time for various summer and autumn comics events. Gillian describes issue 5 as "A5 size with a colour cover and 28+ pages of black and white comic content. We’re expecting this to be our biggest issue yet, with contributions from a whole range of TGC members old and new."

As always with crowd funding there are a list of incentives in exchange for pledges running from simple PDFs of the next issue at $5, up to a full set of Team Girl Comics along with four TGC postcards and the backer's name in issue 5 for $35. The single biggest incentive, of a night out in Glasgow with the TGC team, has already been snapped up and after only a few days they are already over a quarter of the way to their target.

Posted by Jeremy Briggs at 3:00 pm