In Review: Keegan Jask - Tales From the Heaven-11 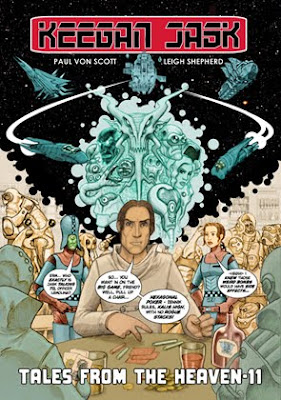 You know that slightly dodgy bloke in the pub who is known for exaggeration and who likes to embellish his stories? Well writer Paul Von Scott and artist Leigh Shepherd have given him a name, Keegan Jask, and sent him into space to the Omega Bar of the Heaven-11 space station.

Tales From The Heaven-11 tells nine interlinked tales of Keegan Jask as he manages to overcome all the odds, as well as various intergalactic hitmen, Mafioso and police, to return to the Omega Bar to get a drink. Do some of the most dangerous beings in the galaxy really hate him that much because he upset their plans, or is he prone to a little too much exaggeration?

Paul Von Scott has been producing anthology titles for well over ten years now beginning with the National Comics Award winning Solar Wind, an affectionate parody of British boy's comics like 2000AD and new Eagle before moving on to his roughly annual science-fiction anthology OmniVistaScope which ran for seven issues and was regularly labelled Fanzine Of The Month by SFX magazine. 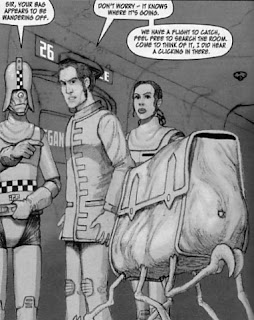 Keegan Jask: Tales From The Heaven-11 reprints the eight Jask strips from OVS as well as the various adverts and one pagers that appeared in that title, plus a brand new tale, Down Among The Admin, and adds to the package with a string of extras from a Jaskopedia of all the places and characters in the strips to Paul and Leigh's 'conversation' about the creation of one of the comic strip stories. With Paul's interest in gaming, both in game creation and modelling miniatures, it is unsurprising that there is also a Keegan Jask RPG game included.

Looking at the board of the RPG made me think of the old British annuals, which often included a dice game, and perhaps the best way to describe this Keegan Jask package is that it resembles a British comics annual for the character. While many other small pressers aim to produce something that looks to all intents and purposes like a US format comic or graphic novel, the 96 page, A4 sized, perfect bound Keegan Jask: Tales From The Heaven-11 could readily be viewed as a softcover British annual, with its selection of contents reminiscent of the best of the 1980s Judge Dredd annuals. 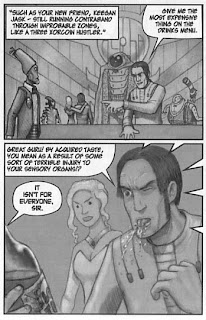 Leigh Shepherd's greytone artwork, with its multitude of different aliens, is a great benefit to the book and while the art in the early tales is less accomplished, you can see how Leigh improves in confidence as the stories progress. It is always worth checking the backgrounds for in-jokes, with Judge Dredd helmets and Dr Seuss hats appearing or one bartender to looks like he is a Doctor Who fan, showing that the artist is enjoying himself as much as the writer is.

Keegan Jask: Tales From The Heaven-11 is an impressive package which combines Paul Von Scott's tongue-in-cheek writing with Leigh Shepherd's multitude of alien creatures to create a remarkably detailed universe for one rather lovable rogue to spin his next tale.

There are more details of Keegan Jask - Tales From The Heaven-11 on the OmniVistaScope website and the book is available from the OVS shop.

Paul Scott will be launching Keegan Jask - Tales From The Heaven-11 at the Bristol Comic Expo at Brunel's Old Station Passenger Shed on 12 and 13 May 2012.
Posted by Jeremy Briggs at 7:00 am