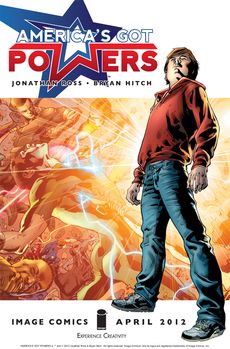 Jonathan Ross and Bryan Hitch will be launching their new comic America's Got Powers (published by Image Comics) at the Forbidden Planet London Megastore on Saturday 14th April from 1 – 2pm.

Welcome to America's Got Powers!It's the biggest TV show on Earth, where the chance to win fame, fortune and get laid are dangled in front of a generation of super-powered teens. All they have to do is Win. Who is the fastest, the strongest or the greatest? Who survives? Young Tommy Watt's dreams of being the greatest hero of them all might just be shattered when the greatest show on the planet begins to reveal it's dark heart.

Needing no introduction, Jonathan Ross is not only a national celebrity but a lifelong comics fan - who made his writing debut with the fantastic Turf! Bryan Hitch, who I've known back since his early days at Marvel UK, should need no intriduction to DTT readers either, but his credits include Ultimates, Fantastic Four, Stormwatch and The Authority. He also worked as a concept artist for the 2005 relaunch of Doctor Who for the BBC.