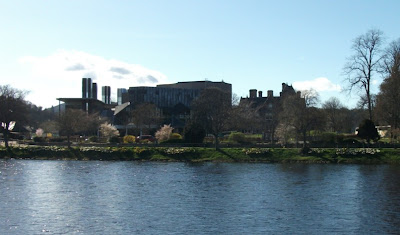 Begun in 2008 by Richmond Clements and Vicky Stonebridge, the Highlands International Comics Expo, Hi-Ex, takes place at the Eden Court Theatre and Cinema complex on the banks of the River Ness in Inverness and, after a break in 2011, Hi-Ex was back for its fourth event over the April Fool's weekend of Saturday 31 March and 1st April 2012. As a helper on one of the sales tables this will be more of a view from "the other side" in the dealers' room than a review of the convention and its panels.

Traditionally, due to its location as the most northerly comics convention in the UK as well as its pre-Easter timing, Hi-Ex and the threat of snow tend to go together. After a direct hit during the first year when heavy snow in Scotland prevented its more distant attendees from reaching Inverness, a pre-con deluge on the second year across the entire country which had been sorted in time for Hi-Ex 2, a post-con fall trapping lorries on the main road south from Inverness the day after Hi-Ex 3, it meant that travelling into a hot and sunny Inverness on the Friday before the convention was something of a culture shock for seasoned Hi-Ex-ers (although no more of a shock than the Inverness region waking up to inches of snow four days later.)

The dealers' room was open on the Friday night for setting up and it gave people a chance for a catch-up chat while they set up tables even if co-organiser Vicky Stonebridge's voice was already failing her - she would eventually give up the struggle, turn her ID badge around and write "Sorry I have lost my voice" on it. 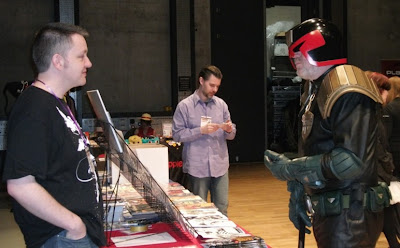 Saturday morning was cooler but still pleasant and, with the event opening to the public at 11am, this gave the exhibitors a chance to both set up and look around the dealers' room as well as have a chat with some of the guests before the doors officially opened. Illustrator, artdroid and Scotch Cornerer Graeme Neil Reid (above left talking to Judge Burdis of the Hi-Ex Hell-Trek) is an old friend and I was behind his table as 11am brought the start of a very busy couple of hours as comics fans young and old, newbies and seasoned con-goers, streamed into the large room to see what they could find to buy.

The first panel of the day was on the subject of current British comics and included Strip Magazine and downthetubes editor John Freeman who, needless to say, had already been into the dealers' room for a chat. 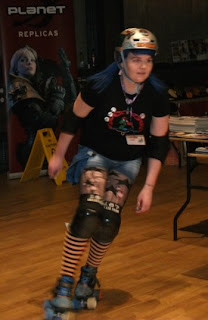 The Saturday panels have been well covered by Joe Gordon over on the FPI blog and they included a talk by artists John Higgins about his multi-media concept RazorJack, artists Nigel Dobbyn and Monty Nero's art workshops, the Hi-Ex Charity Auction with all proceeds going to Children 1st (the Scottish equivalent of the NSPCC) plus discussion panels on current British and Irish comics and an exploration of Celtic (Irish and Scottish) comics.

The Saturday was so busy in the dealers' room that it wasn't that noticeable when panels started or ended as the number of attendees kept the hall busy whilst the Nasty Nessie Roller Girls provided a little excitement as they whizzed past helped on by artist Gary Erskine's Roller Grrrls concept. Meanwhile the Imperials and a solitary Tusken Raider of the 501st UK Garrison patrolled the venue at a more leisurely pace.

Saturday night was the tradition retiral to the local Chinese buffet conveniently situated between the venue and the con hotel before either a return to Eden Court for a screening of the Edinburgh-set short film Electric Man or back to take over the hotel bar. There were a few bleary eyes the next morning... 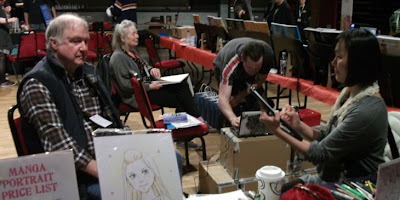 Sunday is normally a quieter day but this then allows for more chatting between the guests and exhibitors as the number of attendees in the dealers room is more affected by the panels which included workshops by Chi-Tan and Inko on Manga and Dave Shelton on children's drawing. Indeed considering how busy the two mangaka girls were doing portraits over the weekend, the workshop may have come as something of a break for them. As can be seen above, one of Inko's portraits was of artist Cam Kennedy - more a case of Kenny Yu than Kenny Who. From the old guard of Star Wars artists to the new and Clone Wars artist Tanya Roberts was showing off her new work while artist Colin MacNeil seemed to have managed to do more than his fair share of covers of many of the books and comics that were being sold in the room. 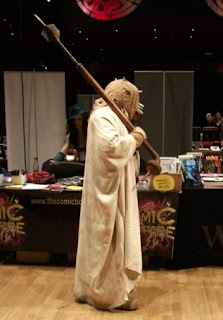 Comics education in the UK also came under the spotlight helped by Dr Chris Murray and Philip Vaughan of Dundee University while film maker John Vaughan gave a tongue-in-cheek commentary on the 1970s bee movie, The Swarm, a presentation format that he has been doing at Dublin's Octocon for the last ten years. In fact those of us at the guest/exhibitors meal on the Sunday night soon discovered that John hadn't so much kissed the Blarney Stone as tickled its tonsils!

Hi-Ex had a big Irish presence this year from both north and south of the border. From Belfast came artists and writers Andy Luke and Paddy Brown who chatted around the dealers' room as well as taking part in panels while the guys of Londonderry's Uproar Comics did a good trade in their Zombies Hi comics as well as doing zombie portraits of the attendees. From the south, as well as John Vaughan, came writers Maura McHugh and Mike Carroll both of whom had their work recognised in the Eagle Award nominations this year.

And all too soon it was over save for one very important fact - the £1907 that Hi-Ex raised for the Children First charity. In these times of austerity when people are counting their money more carefully than ever before, and when so many other comics events are now run to make a profit for their organisers, Vicky Stonebridge and Richmond Clements are to be congratulated for such a enjoyable and family-friendly event that raised so much money for charity.

• Vicky Stonebridge and Richmond Clement's own thoughts on how it went on the Hi-Ex website.

• Joe Gordon's account of the Saturday's events on the Forbidden Planet International blog.

• Hi-Ex attendees can play spot the familiar faces in the background in Breaking News North's video report on the weekend.

And finally... Scottish Television's news section not really understanding what was going on - "workshops, art classes and discussion panels with leading comedy writers."
Posted by Jeremy Briggs at 10:10 am